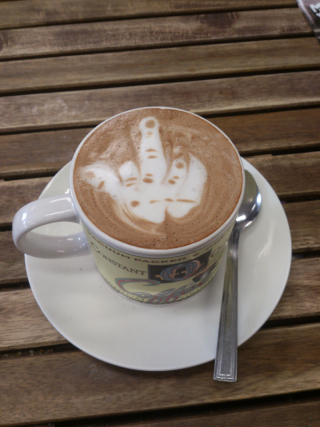 Today was ostensibly a normal day at our coffee chain. Things were a bit slow, but we chalked it up to the upcoming Easter long weekend that everyone is preparing for.

I've just come back from my ten-minute break, taking over for the barista. The fridges are stocked, the syrups are full, the sharpies aren't completely dried out. Everything is surprisingly calm for noon on a weekday.

Calm, that is, until a man comes storming up to the hand-off point, lidless coffee in hand, looks me in the eye and said "This is half full!"

He stares at me with the kind of fury that only a man with nothing better to do than terrorise minimum wage workers can have.

I wait a second to give him a chance to be polite and ask for it to be filled further. He doesn't. "Would you like me to top that up for you?"

He responds by only gesturing at the coffee. I'm not important enough for the effort of words, apparently.

I sigh. I steam the milk. I make sure I have his attention as I fill the coffee. "I'll just let you know, filling a flat white to a centimetre below the top of the cup is the standard for us here at [Coffee Chain]. Many people like to take off the lids to add sugar and such, and since a flat white has no foam at the top to stabilise the liquid, it's much more likely to spill."

He ignores this attempt to save the patience of future baristas, and he takes the coffee, still lidless, without a word and stomps back over to his table.

His wife has an incredible, tired expression of "This again? Really?"

But, y'know, maybe he's right. He paid $5.50 for this coffee, he deserves to have it how he wanted it! It's not like most of that cost comes from the four shots of espresso in it, rather than the 450ml of heated milk to go along with it. It doesn't matter that adding another 30ml of milk is not going to change a damn thing about the taste. This is his coffee, and he gets to have it the way he wants it, policies be damned!

He sits down heavily, and in the struggle to put his coffee down on the table, he fucking spills it.

I'd be fired at that point from laughing my ass off at his dumb ass...

"I take great pleasure at this time in saying I Told You So."