Cake Mistakes: I Am Not Eating That...
The Entitlement Complex: Blue Stain Of Shame

Survey Hell: I know we failed you but all 0's?! 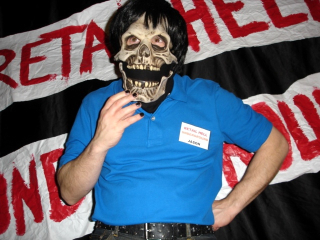 From tigress666, Tales From Retail:

Ok, this is a small gripe. Our store emails random people asking for surveys (and yes, unless we get a 5 it doesn't count).

So these people go through my line and were upset we didn't have a cheaper version of a product (one I agree with them but I have not seen the cheaper one in a long time). They are nice, I apologize and say I wish we did but we haven't had them in a long time. I suggest looking at our website to see if the product we do have is cheaper cause we can match it. They seem happy about that policy stating some stores don't do that. Unfortunately it's not so they buy their product.

My manager later comes up to me and said they gave us all 0's on the survey. Now, no, I don't expect them to give us a glowing survey and I expect some issues since we didn't have what they needed. But on the other hand all 0's? Seems a bit vindictive (not even rating us better on anything else... even average).

I dunno, I expect all 0's when my experience has been totally horrible and the people I talk to have been mean/purposely lazy/unprofessional. Hell, if a store is that bad that I'd give them all 0's, I probably would not have even given them any money and walked off to somewhere else. On top of that, nothing about that transaction seemed to me they were that pissed at us.

It's a small gripe but it bothered me.

Customer surveys are stupid, triply so when they're 0 to 5 but only 5 counts as good'. Make them yes/no and stop being assholes.

I once got a 0 because he didnt like the way the system wanted him to put in the ticket. rated me bad for no reason :(

I agree with TechTyger. As much as I sympathize with retail "slaves", I have NO intention of giving super-special (i.e., "10" on a scale of 10 or "5" on a scale of 5) ratings for ordinary service. Management is fucking you, not me.
And if the survey doesn't distinguish the service from the clerk from other complaints the customer might legitimately have, then Management is doubly fucking you. Don't blame the customer.

The survey can say at the top in big letters 'THIS IS THE SERVICE NOT THE CLERK' and they'll still rate badly for bad service. You know how well they read...