Tales From The Front Desk: Get Out There And Shovel The Roads For Us! 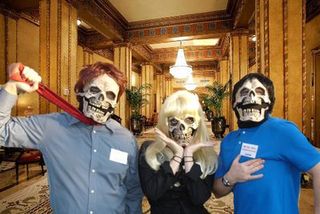 From Kazman07, Tales From The Front Desk

As a front desk employee/manager, you get to see a lot of interesting people and scenarios thrown at you, at the strangest of times. Definitely seen my fair share of nonsense, but last week, we got hammered with some crazy snowfall.

Now, we offer free shuttle service all around the city and 99.99% of the time, there are no issues. Well, when you couple 14'' of snow, a rear-wheeled shuttle bus, and unplowed streets, you get an immobile hunk of metal that... doesn't move at all.

Most people decided, "Well, it's probably a bad idea to drive on roads that aren't plowed, let's be safe and stay where we are."

One family decided to do the complete opposite... surprise! It was SUPER important they get to craft-beer-at-home-whatever conference and they NEEDED to get there, but not pay any money for a taxi or an Uber.

So while they are figuring out how to walk to the convention (3.5/4 blocks away), they ask us to use the shuttle, in the severe weather.

After I explained that the shuttle couldn't move due to unplowed roads and rear-wheel drive(no AWD or 4WD in this van), it was on. I all of a sudden became a "bastard" and was "incredibly lazy" for not shoveling the streets of downtown so the van could move.

After breathlessly explaining for over 30 minutes to them about snow and common sense, it became apparent what kind of vile people these were. I ended up sending them away from the desk and throwing them on the good old No Rent list, but just couldn't shake the feeling they would find a way back to make my life miserable once again.