Tales From The Front Desk: Not The Mature Way To Handle This

I recieved a call not long ago from a lady who booked some rooms for her workmates. She had mistakenly booked for the wrong day, so her coworkers showed up to the hotel with no reservation. (This sort of thing happens way too often. Is double checking the date that hard?)

No problem, we got it sorted and managed to find a room for them. But since no one showed up on the day that was booked, we had to charge a "no show." Well, the woman, let's call her Miss J, was not happy about this. She called and told me her story, about how unfair it was that nobody called to inform her that no one had arrived the night before, and how now her company was going to make her pay for the room out of her own pocket, and how she has three kids and can't afford it and on and on.

She claims that she has worked in customer service for years and is shocked that no one made an effort to contact her. (Because if you don't show up for a flight, for example, of COURSE the airline is going to call your home phone number and ask where you are.)

I tell her that unfortunately I don't have the authority to make any changes or enact refunds for no-show charges, and so I pass her along to my GM. My manager is a sweet guy, a bit of a goof who likes to crack jokes. But unfortunately he gets to deal with all the crap the hotel received. I didn't hear any of the conversation, as he was in his office at the time, but he later told me a rough version of what happened;

He was made aware of her situation and explained the hotel policy to her, how unfortunately since she had booked the incorrect dates and was unable to correct it twenty-four hours before the arrival time that we had to charge. Before he even finished his explanation she starts screaming at him, calls him a dick, dropping f-bombs everywhere, just totally nuts.

I understand the prospect of having to pay for a work expense out of one's own pocket can make people livid, (I had my own personal experience...) but if you're going to act totally unreasonable and verbally abuse someone over the phone, then you're definitely not getting a refund.

My manager shares office space with the pub manager who works next door. The two of them were sitting side by side and while Miss J unleashed her hell torrent of curses and accusations, my manager had to hold the phone away from his ear to spare his eardrums. The pub manager could hear her screeching too. 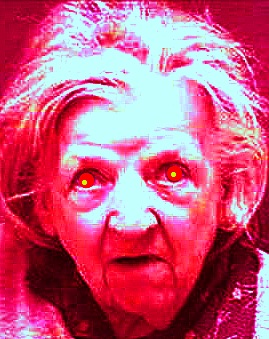 One of the funniest parts was that she demanded to speak to "someone higher" than the manager. There is no one. She wants to speak to the owner. He's not here, probably not even in the country. Miss J demands to speak to me again because I "have his [the owner's] phone number." Why she thought this, I don't know. I mean, it's true, but I never told her that.

My manager tells her that we are unable to give out the owner's number and that there really isn't much point in speaking to me again. (Seriously, thank you, because I'm not good at handling angry people.)

After my manager told me about this lovely "conversation," I thought to myself, well gee, I wonder what the chances are that she's now going to leave a scathing review online because she couldn't have her way.

Not fifteen minutes later, our email notifies us that we've recieved a review. Before I even open it, I know who it is. And whaddaya know, I called it. Miss J left us a "horrible customer service" and "dingy room" review and basically phrased her situation so that it didn't look like her fault. (The reservation dates "SOMEHOW" changed from what she had originally booked. All by themselves.) I know it can be very frustrating to be faced with having to pay out of pocket for a simple mistake--oh BOY do I know--but where is screaming and shouting going to get us?

Miss J, calling our manager nasty names and leaving an equally nasty review is not how mature adults should act. I'm surprised someone who claims to have been in customer service as long as you doesn't have a better handle on her temper.

Since she was booking it for her company, I would contact her company and let her management know about her lack of professionalism. And most reviews allow you to respond so you can respond that she had acknowledged to you that she booked incorrectly and then proceeded to scream profanities at you for upholding the policy.