Dumbass Customers: I'll Have that Ham 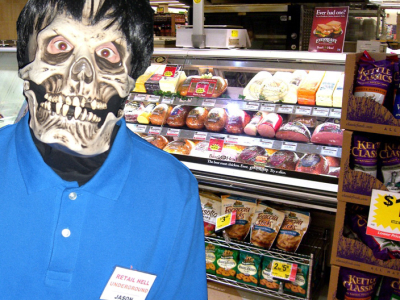 I work at a supermarket with a deli/bakery. A customer approaches the deli and I ask if I can help her. She wants “this ham here” and points to the ham she wants. I see if we have any open in the case and I ask her how much she wants.

“Is there a smaller amount you want?”

“How much is it for the whole thing?”

“Lemme look up the code and weigh it.”

It was at that point she probably guessed the weight of the ham and did some mental math and realized that she was going to be spending more that $50 for it.

“On second thought, never mind.” And away she went, shuffling off in awkward embarrassment at the assumption that a large piece of meat was only $7.99.

I wonder if she ever had meat sliced at a deli before.

When I worked deli over a thanksgiving, I had a confused college kid wonder into our area. He looks at the meat for a little bit, and then opens the case up from the front taking out an entire turkey breast. At this point I wonder over to try and help the guy before he hurt himself. I politely asked him how much he wanted and how he wanted it sliced. "Sliced?" after talking to him a moment, I came to realize that this poor kid was making thanksgiving dinner for the first time by himself and didn't even realize where to start. I took the turkey breast out of his hands and explained to him the meat you cooked at home was in the meat department, including small breasts that he could cook quickly at this point. He got a huge look of relief on his face, thanked me profusely, and skipped over to the meat department. I so wish I had a way to get in touch with the kid later to see if how exactly the meal turned out and if there were any casualties.