Mistaken Identity: "I'm just as lost as you are" 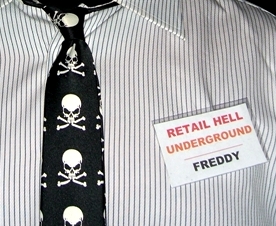 This was a few years ago, which is only important because literally everyone was wearing those North Face jackets at the time.

I went to a giant outlet mall. It has 5 "neighborhoods" and 3 Aunty Anne's to give you an idea. It was my first time there, so I stopped in front of the directory to figure out where I was and where I wanted to go.

Behind me, I hear an older couple (60s or so) having a hushed conversation. LW will be lost woman, LM will be lost man, and I'll be me.

LM: I'm not going to ask her. She probably doesn't know.

LW: But she's wearing the jacket. She has to know.

(LW walks up to me and starts talking)

LW: The North Face store. Where is it?

Me: I'm sorry, I don't know. I've never been here before.

(LW just stares at me)

LW: But you're wearing the jacket.

Me: Yes, but I didn't get it from here. Like I said, this is the first time I've been to this mall.

LW: Where did you get your jacket, then?

LW stares at me a bit longer. After a long pause, they both just shuffled off without another word.

For giggles, I decided to look for The North Face store on the directory. It was literally 2 stores over and they had just walked off in the wrong direction.

Wrong. In fact, not even close to true. (smh)