Crappy Design: This Is Not A Bonding Experience I'd Attempt
This Candle For Writer's Block 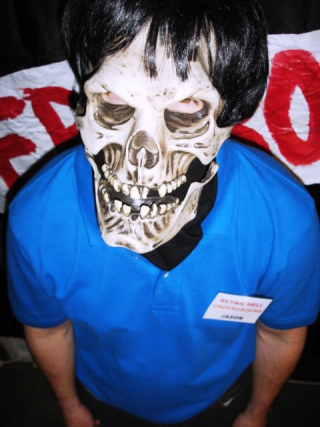 From  _Magnolia_, Tales From Retail:

I used to be a cashier for a typical big retail store, not known for its organizational prowess. And for about a month, it seemed that every couple shifts I can in, the managers would be taking down a display, putting up another one, then they'd take down the new one, put up another... Just lots of rearranging. Apparently corporate was testing what should go where to sell fastest?

Anyway. One day, these adorable coloring books get set up. My manager says something along the lines of, "these will never sell up here...". They were for adults, had three themes (animals, flowers, arabia/geometric). The paper was nice and thick, and the backs were cardboard.

I've wanted one for a while (they help calm me down! I like coloring things!), but was disappointed they were priced at $9.99. I then remembered I had about 3 dollars in store credit so decided to buy one at the end of my shift.

I got off at 10 pm, which is closing time. A couple minutes before close and after not having seen customers for 15 minutes, I asked a friend to ring me up (can't ring yourself up, for obvious reasons). She told me my total was about 60 cents. I was surprised and asked how much does credit I had had. "Oh, I didn't use any! Those are fifty cents!".

I ran back to double check all the other variations. Yup. They ring up as 50 cents each! So I bought one of course. The screen at the end of the transaction said, proudly, "Congratulations! You saved $9.49!".

So obviously they were in the system correctly...

I told my managers, and they were both like, "Ahh. Okay. Nice... We can't fix this right now. Oh well." They said they'd let someone know. But they bought a couple too! So did some other cashiers.

I told my mom when I got off work, and she requested that I go in tomorrow and buy her a dozen for her work (she works with kids). Usually that would be $120 before tax... It was only about $8 after tax. And I used my store credit too. The cashier who rang me out wasn't one who had been working last night, and did not care that I was getting a dozen books for about 5 bucks.

I think other customers figured it out. Two shifts later, the shelf was totally empty. So I think corporate decided our location really likes coloring books up front.

I love pointing out those sorts of unexpected sales to customers if I see them.

At my store, someone at corporate recently had the bright idea of having a big stationary sale for slow moving items, marking everything down to 50c each, and it's all been flying out the door at a fraction of the original price.

Of course, now that stock has already started selling, we've gotten a store email to say 'oops, that was a bit too large a hit on our end of financial year profit margins, here, put these items back up to only 30%/50% off.' Wee bit late for that kiddos.