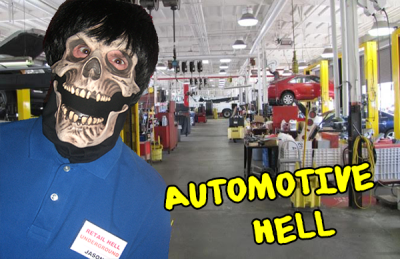 From  asmallman, Tales From Retail:

This happened about 2 years ago. I was working in a large store that had an automotive service section. We changed some fluids and tires. That's it.

One time we had a lady come in with a junker. I thought the damn thing would fall apart in the shop. So, the driver door was fighting us and we had to climb in through its open window to get into the damn car. We did not attempt to force the door open in any way.

After shopping the lady comes back to me to check out and pick up her car. She bought about 200 dollars worth of items. So it took a million years on top of all of the car paperwork.

About 5 minutes after she left, she walked back in through the door and demanded a manager. I asked what as wrong, and she walked me out to her car. There was a HOLE in the lock of her door. She claimed that we had used a screwdriver to pry open her door!

So I called my manager on his cell, and he walked out there and was as 'surprised' as I was. We checked the security footage, and the LADY PULLS OUT A FUCKING SCREWDRIVER AND JAMMED IT INTO HER OWN FUCKING LOCK.

We showed her the footage and promptly called the cops while she vehemently denied it and incessantly accused us.

The techs might look like bad guys, but they treat the cars nicely. So good luck finding fault with them.

The cops were not happy with her. They promptly left with her in the back of their car. I have no idea what happened to her car though. It was not there on my next shift.

Edit: People are upset with me that I didn't quite finish the post. I edited it so yall don't have to ask. She was arrested. On top of scamming us, she must have done something to piss off the cops.

Wow. Self-sabotage with bad intentions; practically blackmail! I'm so glad you had evidence.