Crappy Design: There’s A Whole Front Of A House To Work With...
Discount Rat: "I Want Them, I'm Just Not Paying That Price" 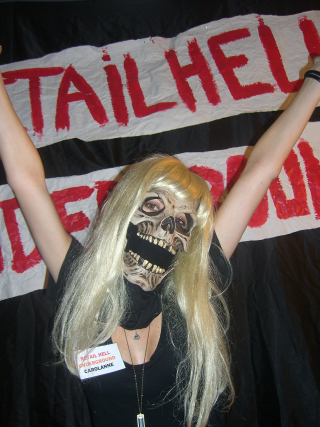 From u/Disaster_Plan Tales From Retail:

A few years ago I was a customer service manager for a large computer store that included a busy repair shop. One Saturday afternoon I got called to the service counter to talk with a middle-age couple and their daughter who was maybe 16. The couple were both furious, especially the Dad, but the girl was silent, stood apart and avoided eye contact.

The Dad explained that his daughter had checked her laptop into our tech shop for repairs several weeks before and they were there to pick it up. But despite a lengthy search, our techs could find no record of her laptop in our system. The Dad icily implied they were getting the runaround because they were African American and, in effect, we had stolen their daughter's laptop.

The whole thing was extremely strange. At that store, checking a computer in for repairs was a lengthy process in which we entered a dozen details including name, address, phone number, email, make and serial number of the computer, password, anti-virus installed and a detailed description of the problem. All that information was put in our computer and a copy given to the customer. A unique number was assigned to each piece of equipment checked in and a hard-to-remove sticker was applied with that number.

It was possible to steal a computer from our repair shop, but it only happened once in the years I was there. And that was a $1,500 gaming system snatched by a shady tech who was soon caught and fired. Non-techs who walked into the shop got an instant "Why are you here!" stinkeye from the techs, who didn't like non-techs in their space or touching their stuff. And even if a computer was stolen, the details couldn't be erased from our system.

We searched the repair shop and our records again and again with no results. We repeatedly asked the daughter for more details which she was strangely reluctant to provide. She finally said she checked her computer in with a technician named "something like Mike" and she gave a date. We had no repair tech named "Mike" or Michael or Micah. Another manager watched the video feed from our service counter for the date given and never saw the daughter.

I think the couple, at least the Mom, could see we were making an honest effort to find the laptop and just not getting anywhere. And she was asking her daughter more searching questions, and getting less and less happy with the answers and evasions.

Finally the Mom pulled the Dad aside and they had an urgent, whispered conversation. The Dad started glancing more and more at the daughter who was staring into space with a blank expression. Then the Dad gritted his teeth, said they needed to talk privately, and they left the store.

We never saw them again.

My theory: The daughter sold her laptop to finance some shady activity and told her parents it was in the shop for repairs. Then the family was out shopping together and Dad said, "Why don't we pick up your computer while we're running errands."

Wasn't this already posted? Or did I read it someplace else?

I was wondering the same thing. Might be a repost from NAR.

I don't read other sites like this; this was definitely posted here not long ago.

That's what I *thought* - it could have been NAR but I didn't recall seeing it there.

Either way, it's still a big moment of wtf.

Yeah I think a couple stories got double posted.

Oh good, nice to know I'm not crazy. Well, ok, I am still a bit crazy, but I HAVE read that story already, lol.