Tech Support Hell: The Save Button Only Saves To Floppy! 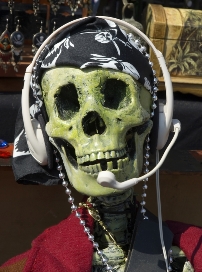 I got a call from my manager because she was unable to save a PDF document to her computer. I figured it must be one of those forms that Adobe Reader won't save after filling it out. I was wrong. It was a basic document she had scanned.

I explained to her that clicking on the floppy disc icon would give her the option to save it to her desktop.

She continued to argue with me about the significance of the floppy disc icon!

I kept telling her to trust me and to click it.

She refused. She insisted that I was not understanding what she was trying to do.

I kept telling her to click on the damn icon. I offered to click the icon for her. NOPE.

She insisted to let her do it (or else she wouldn't learn). She was getting upset with me and raised her voice, insisting that I was wrong.

Finally she lifted her hand off the mouse for a brief moment and I grabbed the mouse and clicked the floppy disc icon. Sure enough, a window popped open asking her to save her document to the desktop.

Tech: 1. You called me because I know how to do this and you don't.
2. The 'Floppy disk' button will open a drop down box with options.
3. The 'Floppy disk' button will save it, not delete it, so,
even if I'm wrong, you haven't lost your document.
4. Even if my way takes longer than the 'one button' you are looking for,
which doesn't exist, it will be quicker than arguing.

Verily, plus sales tax. It should be on the recording when they call... "YOU called US because you don't know how to fix whatever you screwed up. Let us fix it."

Yeah, that's what I would have done first... but I'm an old geek who grew up before mouses were standard equipment. :P

I grew up using the old Macs in the nineties (I both love and loathe Oregon Trail), so I've always had mouses, but I just find the keyboard shortcuts faster. Especially for printing and copy/paste.

Of course, with the latest updates of Windows 10, you just have to save at the beginning of your document and it 'automatically' saves everything, but I'm a bit too paranoid to rely on it exclusively.