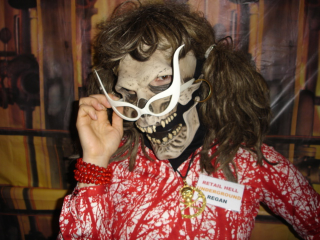 There is a fast food establishment in my area that has been so ridiculously bad over the years that I go there on occasion just to see what outrage will happen. Here is a sample, each story more ridiculous than the last.

-While waiting for my order in the drive thru, a large male employee asked if I would like to see his new tattoo and lifted his shirt to show me the tattoo on his stomach without me answering one way or the other.

-One night a friend and I went there to get a snack. They asked for our order and after we had placed it, they apologized and began listing off everything they were out of, which when put together meant that there was literally not one thing on the entire menu that could be ordered fully.

-A different friend and I had nothing to do one night so we went over as a joke. With 4 cars in front of us, we waited in the drive thru line for 80 (not a typo) minutes. When we finally pulled up to the window, the worker greeted us with "ARE YOU ACTUALLY GOING TO GET ANYTHING, OR ARE YOU JUST GOING TO DRIVE AWAY?!?!?!? IM SICK OF THIS!!!!" We ended up getting our food and the food of the person in front of us because they had left without it. Surprise, surprise, we got food poisoning.

-My brother got a call from a friend and told him to hurry down to this place. The employees had started a mutiny against the management and were giving away everything in the restaurant for free. Once they were out of food, they turned on every heating device, locked the doors, and left with all of the keys still inside. No, it did not burn down. I actually don't know what happened. I imagine a manager came by to close and stopped it, or one of the workers felt bad and notified someone.