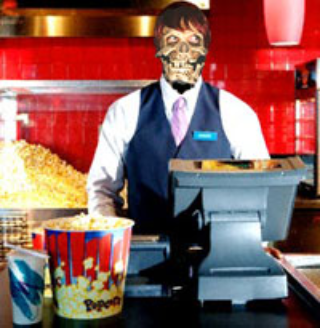 I had a really bad day at work (my current job, not at a movie theater anymore), and so hopefully posting this will help me blow off some steam (and put things into perspective about how my job could always be worse). WARNING: this is going to be VERY long, and it will be full of a LOT of whining, so skip to the end if you want a tl;dr.

For those of you who have never seen any of my posts or comments on this sub before, a little backstory: I worked at a 14-screen 3 Letter Devil movie theater from late September of 2016 to June of 2017. I took a disliking to the job almost immediately, and that was solidified this time last year when Beauty and the Beast came out. It was, by far, the worst movie I had to deal with at that hellhole theater in terms of the "guests" it attracted. I've touched on it, but this story from opening Friday was something I've never told on this sub.

So I was actually cast in a musical at a local community theater at the time, and that musical's second and final weekend correlated with BatB's opening weekend. So, thankfully because I had pickup rehearsal at night, I got to miss the Thursday pre-shows of BatB (which i heard were also terrible), but I had no choice but to work opening Friday (thankfully getting all of Saturday and Sunday off, thanks to the musical). This entire shift was terrible for 4 reasons:

All of us had to deal with one of the busiest Friday mornings we had in a while (despite the fact that we were in a touristy beach town in the middle of spring break season, and the weather outside was gorgeous after a week of super inconsistent weather. Disney's bland, nostalgia-pandering remakes just can't wait, apparently). Why were we so understaffed for such an anticipated movie opening? Oh, I'll get to that later.

2.) Shitty "Guest" Situation #1: As I mentioned above, I was working concessions. 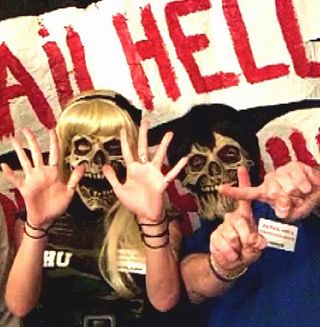 The line was completely full from the moment we opened, with multiple shows going on (as well as other movies) me and the other guy running the cash registers never had a chance to catch our breath. We're trying to get through each transaction quick, key word being "trying".

One old woman gets up to my register and orders 2 small popcorns (back when the 3 Letter Devil actually had small options). I tell her the total, she pays, and I grab 2 small bags from the warmer. Because we were so busy, that warmer had been emptied and filled back up with popcorn from our continuously running popper all day. Well, that certainly won't do for this not at all entitled "guest"!

As soon as she noticed I had got the bags from the "dreaded" warmer, she immediate stuck her fingers in both bags and the same time, put multiple pieces from both bags in her mouth, and pushed the bags across the counter back at me, with a not at all pretentious, "No. This isn't fresh. Get me FRESH popcorn from there points to popper. You're not gonna charge me $12 for popcorn that isn't fresh"

Of course, I have no choice but to get the 5-minute (at best) fresher popcorn from the stupid popper. And those 2 bags of popcorn also had to be added to the already massive "spoiled out" list since she stuck her hands right in them and ate out of them. As soon as she leaves, the next 5 or so groups in line that saw that transpire all demand that they get the "fresh" popcorn too, and many of those same groups are the ones complaining that the lines are taking so long.

Well gee, maybe if you just took the already-made, not at all old popcorn from the warmers like everyone else, you and everyone in line behind you wouldn't have to wait for me to scoop your 10 different orders of popcorn from the popper just so you can pretentiously feel like you're getting "fresh" corn with coconut oil on it. It's not a salad, people.

3.) Shitty "Guest" Situation #2: I get a mom and a horde of kids at my register while the line's still packed as hell.

She orders a large popcorn and says "and you're gonna fill it halfway so we can go layer our butter and bring it back". Those were her exact words, she didn't ask, she demanded that I do it. 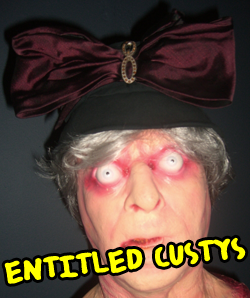 I've mentioned it at our sub before, but at my theater, we were always told we weren't allowed to do this. I never got an official explanation why. Sometimes I heard that it was just company policy (especially when it was super busy, like in this story), other times I heard it was a health code violation. I never knew which it was, but I always told people the latter because they were usually more understanding of that. Plus, we gave out cardboard trays for free so that people could layer their own butter by the pumps, so most people never made that big of a deal about it. Not today, though.

I give the usual health code line, and am trying to offer her a cardboard tray when she rudely cuts me off with a "I've never heard of that!" and immediately snaps at my manager (who was also behind the counter, thankfully helping me and the other concessions employee out with running stuff and doing hot foods and such). She bitches about me to him for a few seconds (right in front of me...) before he tells me to just let her do it. Great, now she gets what she wants and I look like an asshole...

So she goes off to layer her butter, and I can't take any customers while waiting for her to soak her stupid popcorn in fake butter or else I look even more like an asshole. (She still made some more bitchy comments at me when she brought her popcorn back for me to top it off, so I would've had to deal with that either way...) So, just like the situation above, everyone in the packed line saw that exchange and the all want their goddamn butter to be "layered", and I have to wait for all of them to spend 5 minutes at the butter pumps before I can move on to another transaction.

And, also just like the situation above, some of those same people bitch and moan about how long the line is taking. The fucking lack of self awareness...(I'd like to add that, for the most part, I liked all my managers. This was really the only time the manager in question really made me miffed).

4.) So, the reason why we were so understaffed and me and only one other guy had to deal with all that shit? Well, let's back up a bit: I actually had a second job around this time, acting as a certain spider-themed superhero for a kid's party company. 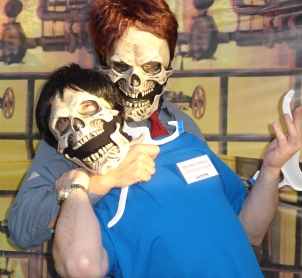 I say "second job", but really I only worked like 2 or 3 events with them before leaving to move across the state for my current job. The reason I worked for them so seldom is that the company was mainly geared more towards girls parties, as their main focus was Disney princesses. I had heard, about 2 weeks in advance, that they were going to be doing photo ops at the theater with one of the Belle actresses. There was also going to be a photographer (one of the 2 women behind the company was a professional) and two face painters (some of the character performers did this when not acting). Sweet, both of my jobs working together on the same day. Lol no.

I came into work early and found out that the photographer, face painters, and the girl playing Belle (who had absolutely zero acting experience, btw. She was pretty nervous) were all going to be 3 Letter Devil Employees, on the payroll for the day and all. I was a little pissed off, but whatever, maybe the deal with the party company fell through for whatever reason.

Well, after I get off work and am at the community theater, getting ready for the performance that night, I see on the party company Facebook group that apparently, my 3 Letter Devil managers had simply stopped replying to their emails, deciding that taking half our available employees and paying them to do non-essential things that day was better. The managers of the party company were pissed, and I, having still felt pissed off about all the above stuff, tore them apart on the Facebook page (thankfully, all my party coworkers and managers were cool and agreed to keep it to the Facebook page).

Like, I get if they decided that paying the party company for all that stuff wouldn't be worth it. But in that case, why have it at all?!? Why couldn't all those employees actually have been helping the 5 or 6 of us who were actually being paid to do movie theater duties?!? Was having an inexperienced princess performer and face painting really a necessity for such a busy day?

Whew, got it all out. This really did put things into perspective about my shitty day at work today, so I applaud you if you made it through this wall of text. If you didn't, here's the tl;dr I promised you.

tl;dr: The 3 Letter Devil movie theater that I worked for scheduled 5 or 6 people for a super busy opening Friday of Beauty and the Beast last year, with only 2 people (including me) behind concessions. We had to deal with angry "guests" bitching about the long wait times, all while having a ton of nitpicking demands about "fresh" popcorn and layering their butter even though we had self-serve stations. And the reason we were so understaffed and the lines were going so slow was because at least 5 other employees were getting paid to put on a ghetto Disney World at the front of the theater.