Thrift Store Hell: "Because That's Not Suspicious At All!" 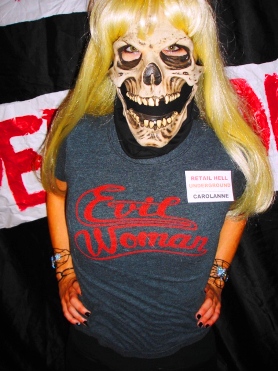 Okay so this isn't my story, but a story No-Nonsense Steve told the rest of us.

Steve was on the door and a woman comes up. She's donating one complete set of camping equipment; tent, sleeping bag, lantern, etc. Practically brand new. Used only once. Cool. All that stuff is Steve's responsibility. He checks that stuff for quality, prices it, and puts it on the floor. The stuff she is giving him is entirely his domain.

Lady, as she hands the stuff over: "Yeah I went camping with my boyfriend and came home single."

Steve to us later: "Yeah, that wasn't suspiciously phrased AT ALL..."

He told our store manager, and as many of us as he could pin down to share his concerns and to tell us to keep our hands the hell off of whatever was donated for a while. (Sometimes we like to shop in each other's areas for cool stuff, and we'll price the First Picks for each other.)

A few hours pass and we get a call. The lady "accidentally" donated a shovel and a pickaxe, and she would like them back.

Missy, who has already been told about the concerning phrasing: "...Okay, I'll have my employee look for them for you."

Steve, when the manager tells him: "Okay, you know what? Tell her that I want to be the one to give them back to her, and that no one else is to touch them. It's already got my prints on them, if she wants them back she has to come here at a time when I'm present."

She did show up when Steve was gone, once. Missy relayed the message and apologized with a Retail Smile that Steve wanted to be the one to give them back.

The lady showed up later and DID get her shovel and pickaxe back. She may have been completely innocent, and phrased it poorly. She MAY have also done something... concerning... to her boyfriend.

For the love of Thrognar, people, watch what you say to retail slaves. We're all just waiting for the police to visit with Steve and ask him a few pointed questions...

Update: No one has been identified as missing in local news. Here's hoping it was just phrased poorly.

Heh. I'd have thought more "Turns out we don't like spending a lot of time together with no way to get away from each other"... up until she asked for the pick and shovel she'd taken camping and came back alone from.

Our town hardly ever has a murder, but after a really bizarre one involving all people from another state, I would have been worried about this interaction and called the police. I can't give any details or you'll know what case it was. This should be vague enough not to distinguish it.