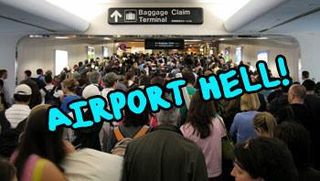 I got to the airport late one night for a red-eye flight, and first off my flight had been delayed an hour. Then another, and another! I politely asked what was going on, and was simply told that they didn't know. After another 45 minutes, we got told it was a maintenence issue (wiring in the tail? something like that). I was visibly upset, I was 3000 miles away from my boyfriend and best friend and couldn't call them because we hadn't purchased cell phones yet (thank god for Tracfone, we all have one now). I had to stay all night in the airport and only by luck were we all bumped onto a 6am flight (now seven hours late. T_T and my boyfriend was out of his mind) and just crammed in with everyone else.

What did we get? A useless breakfast card passed out 15 minutes before boarding (for $5 at the airport McDonald's that was 20 minutes down the terminal... it would have been useful if they'd given them to us earlier on), and a $10 coupon to a *local* hotel (so useful when I'm trying to fly 3000 miles AWAY from there) that already charged about $150 a night, that expired the next day.

I asked, very politely, a bit nervously, if it was possible for them to call up one of the security posts or something at the other airport and call my boyfriend in and tell him I was okay (which I know *can* be done)... and they said no.

Long story short, My boyfriend had nearly had a full blown anxiety attack in the airport, and I've never flown Delta again. T_T

(Since I didn't mention it, I want to say I was nothing but incredibly polite, I know airline workers go through hell and I surely do not want to make it harder on them. But it took four hours (3am!) before they passed out a minimum number of blankets and pillows... and never gave one to the poor sixty year old woman next to me who was obviously cold (I had a sweater, she didn't), and so I gave her mine, because I didn't need it as much)

That sucks... I had something similar happen to me, on the way back from Oregon. The second leg of the flight was delayed, delayed, delayed and finally cancelled. We got precisely dick. They told us they'd put us on Southwest, (This was Frontier. Never fly Frontier.) Southwest didn't open until 9am, and this was at 4 in the afternoon,. Annnd, that's all we got. Not even 'Sorry'. They put our bags on one of the luggage carousels, and didn't tell us, or tell us which one. Someone looking for a rental car happened to go past and noticed his bag, and came and told us.

So, I sat for 18 hours int front of Southwest's counter, along with everyone else, and they finally got us on a plane. I ended up being 24 hours late (I had scheduled it so I had a day off work to get back to my night schedule; I ended up getting home ten minutes before I was supposed to be at wkr, having been awake for 30 hours straight.) I had been sending emails and texts, so they knew what was going on, and I told them I wasn't safe to drive, and if I COULD get there, they didn't want me on the phone, unless there were some customers they were looking to get rid of.

Slept 18 hours, then went to work the next day. Never again will I fly Frontier; I don't care if they're the last plane out of the zombie apocalypse, I'll take my chances.