Awkward Asian Wearable Wednesday: Is This Supposed To Be Inspiring?
#BadStockPhotosOfMyJob: There's No Possible Way The Suit Can Be Ruined By That Baby

Bitch Encounter: YOU'RE SUPPOSED TO SAY EXCUSE ME 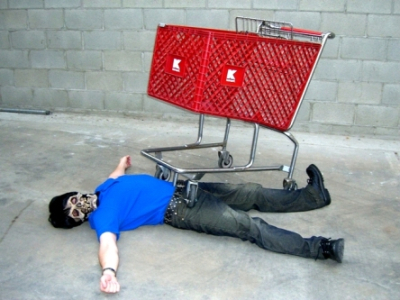 From u/oLemurs Tales From Retail:

Recently this has been bothering me and I mainly wanted to know your guys's opinion if I was in the wrong.

So I was a cart pusher today and just started my shift, i was bringing in 5 carts like I usually do and once i turn to head into the store with the carts i see a lady coming my direction so like usual i try to avoid her and turn my carts so they are not heading into her direction because if you've never pushed carts you would know to stop them you HAVE to run to the front one and grab it otherwise they will all fall apart from each other.

so it was one of those things where I sorta move to the left and she moves to her right (my left) so instead of moving again i though since I was pushing 5 carts and she was pushing one she would be intelligent and move out of the way since I wasn't going to change lines again (couldn't really turn right because i had a wall on the left and the rear of the carts would smack the wall) as i go by I realized she wasn't going to get out of my way so i run up to the first cart and stop it.

I thought she was going to apologize so i didn't say anything because clearly i assumed it was her fault into when i walk away i hear her yell "EXCUSE YOU" i was surprised and I've seen more insane customers and honestly i thought she was kinda joking so when i come back around to get some more carts shes just staring me in the eye and since I'm not a little bitch i stare back and as I'm walking by she says "you're SUPPOSED to say excuse me when you're about to hit someone" word for word.

I don't know what to say and U don't want the bitch to complain about me so I sarcastically say sorry.

Technically it was your fault because you are supposed to keep to the right against oncoming people/traffic, and you veered left instead.

No, it was her fault for being a dumbass and standing in front of a bunch of carts with momentum and weight that are difficult to redirect.

Some people just don't understand physics. Commenting on someone else's presumed rudeness is in itself quite rude. Also, I was taught as a child that if someone is performing a job, that you get out of their way and let them keep their schedule.