Fun-To-Mental: An Appliance Fat Bastard Would Love
Sunday Barista Stories: Do You Even Taste The Pumpkin Spice?

Closing Time Nightmares: But that’s a picture of your credit card... 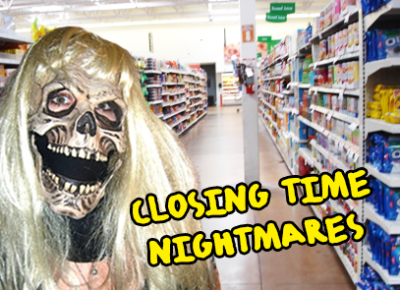 From u/polelifeandpussy Tales From Retail:

So I work at a supplement store. A woman comes I. 10 mins before close to make a return from an online purchase. She says she ordered these supplements for a trip but they arrived late so now wants to return them. Ok no problem.

First it’s starts to take a while because for some reason this purchase won’t appear on my computer like it’s supposed to. But it’s fine I get the ok from my manager to override and do this manually.

So I get to the end and ask her to produce the card she had made the purchase with. Our policy is very clear that money must be put back in the exact card to prevent frauds. But this lady has not brought the card. She brought a photo of her card, and only of the front so not even the security code on the back. I politely inform her that we actually need the physical card, but she tells me it broke.

So now there’s several things that don’t make sense to me. Our shipping only takes 2 days so how did these arrive to late for her trip, and why would she not just want to keep them for use later? Why did she take a photo of her card before it broke? Did she know it was going to break?

Well I inform the lady that we can’t finish the return with just a picture of the card, and as is written in our policy, we can’t give cash back for a card purchase. She starts yelling at me telling me heb let’s her and every other store let’s her. So I calmly tell her that I will call the manager. I already knew he would confirm the we need the card line but hey maybe this will calm her. He of course says no I politely inform her and she begins yelling at me again.

Now it’s officially the time I have to close the store and I still have two customers behind her and I’ve spent over ten minutes trying to do this for her.

It felt very satisfying to smile and wish her a good day as she finally picked her box back up and walked it ranting and yelling at me the whole time.