Awkward Asian Wearable Wednesday: Is This About Flowers, Or Should Somebody Tell Him...
#BadStockPhotosOfMyJob: When You Throw Ideas Around, You Need Proper Protection 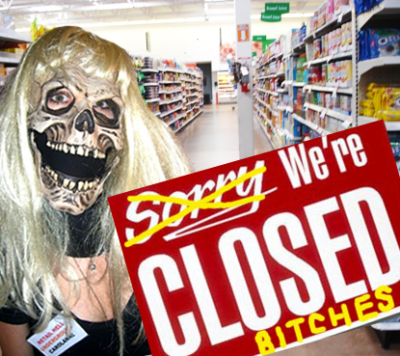 From u/Drakal11  Tales From Retail:

So last night I was supposed to work 2-10pm. We're open 24 hours and the people who were supposed to be there until midnight and 2:30am both called in so it would have only been the overnight cashier from 12-6. Needless to say that wouldn't have given him any time to get stuff done so they asked me to stay until midnight and the other cashier to stay until 2:30. We both agreed so crisis averted. It wasn't that busy right up to midnight. Everyone always seems to checkout at 12 and then it goes back to being dead. Well at midnight we have to swap out the register tills for new ones and if you aren't going to be on the register after midnight, you have to make sure your line is cleared by 12:10 before the swap goes through. So I take as many people as possible, but have to start turning people away. Most people understand that not too many people are going to be working that late at night and having to wait a couple minutes isn't unreasonable. Not this guy. He'll be Jackass (JA).

JA: Well then where am I supposed to checkout!

Me: (cashier next to me) would be happy to help you.

After JA continued to huff and moan the woman I was currently finishing up with surprised me and yelled at the man saying it's not my fault and to come earlier if he wants more cashiers.

After JA waited in line for a couple seconds he saw the self-checkout machines and tried using them. They dutifully told him they were closed, and then he disappeared. I was watching him because I was wondering if he was going to just steal his stuff. After I cleared the line and turned in the till I checked to see if he left his stuff or if it was gone. I didn't see anything and so told the manager that he probably stole it. Left it for the morning people to deal with when they could check the cameras. Our cameras are apparently phenomenal and cover every inch inside and out so no need to worry about whether he got away. I just find it funny. Like, I've been here over 10 hours. If you think I care about you waiting another couple minutes you're sorely mistaken.