Meanwhile in Poland...
Sidewalk Signage: When Life Gives You Lemons...

Crazy People Encounters: Energy Healing Is Not A Substitute For Medical Attention The Store has a number of contracted practitioners of various holistic/natural/new agey "healing" practices who are on call throughout the week for customers who want their chakras whacked into alignment or their energy massaged. There's regular massage therapists too, that's okay. But this isn't about them. This story is about Liability Lady and no-touchy healing.

It's a slow day in the store, which I don't mind because I have to deal with new stock and creating a new ad campaign. The phone rings.

Me: "Thank you for calling the New Age Store, how can I help you?"

Liability Lady is a regular who usually does tarot card readings and past life regressions. How many past life regressions can a person need? Today, LL sounds particularly frazzled. Magical Monica is her regular "intuitive" who won't be in until later on in the afternoon.

Me: "I'm sorry, but Magical Monica won't be in until later on in the afternoon. But Paranormal Peggy is going to be in around noon, maybe she can help?"

LL: "NO IT MUST BE MAGICAL MONICA. I AM HAVING CHEST PAINS AND IT'S GOING INTO MY ARM AND I'M SCARED! SHE HEALED ME BEFORE!" 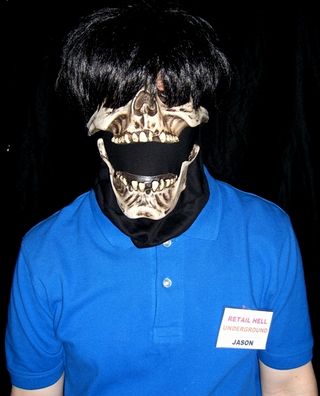 Fortunately the store's owner was in her office, so I put LL on hold and buzzed the office. I explained the situation and she said that LL had signed paperwork a few weeks ago before a chakra whacking session, that basically said she understood the "energy healing" is to be done in tandem with actual medical stuff, is not a replacement for actual medical stuff, and so if she gets sick or dies because she only does the energy healing and no actual medical stuff, she can't sue us. (No, I didn't ask if there was a clause in the paperwork about being sued by a reincarnated customer or by a psychic channeling said dead customer.)

I am not a lawyer, I have no idea if that will hold up in court, but the owner seems confident. The store owner adds that LL suffers from severe anxiety (do I need to know this?) and that's probably what's wrong. So, book her. Call in Magical Monica. It's $100/hour for an energy healing session.

I return to LL.

Me: "All right. I can call in Magical Monica and she'll be in shortly. We'll see you soon."

Magical Monica was happy to come in early for the healing session. Liability Lady took her time in coming in despite the seeming urgency of her situation -30 minutes later, and I know she lives about a mile away from the store. LL was also visibly unwashed, garbed in pink yoga pants and a t-shirt that read "Stump Trumb" (not a typo on this end), and was sans shoes.

LL made a point of proving how sick and weak she was by staggering into the store and sprawling onto the counter like she was going to burst into a La La Land musical number. Magical Monica ushered her into a "healing chamber" and I waited for the word to call an ambulance, but it never came. LL emerged an hour later, happy as a yogi with a picnic basket, paid her bill, and waltzed out of the store.

So what happened in the "healing chamber?" How was LL's deadly crisis averted? Magical Monica literally waved her hands over LL's body and said she had cleared up an energy blockage to her heart chakra and all is hunky dory. (To Magical Monica's credit, she also advised LL to see a real doctor.) Different placebos for different folks, I get it, whatever helps you sleep at night, I just wish I didn't have to be involved in the enabling of the craziness.

(Oh, and what caused LL's blockage to her heart chakra? She failed her real estate licensing exam.)

Damn straight - I've had anxiety attacks like that before and even knowing that's likely what it was, my doctor still insisted on a full cardiac workup anyway (to be fair, heart problems DO run in the family, but she said she'd have insisted even if they didn't.) This is something not to fuck around with.

That said, LL was a dumbass.

Twitch. I've had those symptoms. All in all, I had irritated something in my shoulder, and had a major panic attack. So glad my anxiety is doing somewhat better. I went to the ER once. They treated me seriously, ran the tests, waited for blood work, and told me I was fine. Of course the little pill they gave me did even more good. I now have a couple on hand for if I have another anxiety attack like that.