Dumbass Customers: Someone Made The Text In Cursive! 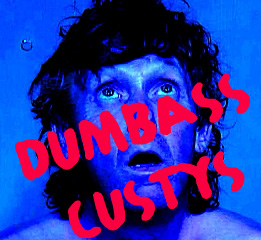 In college, I worked for a floral shop that shared a space with a bakery. We had the space for both businesses to operate and it naturally was a good partnership. This story takes place near the end of my senior year. I was six weeks shy of graduating with two degrees. Although I cared about the stores and wanted them to do well, my nonsense-tolerance had dropped significantly. One day, a woman came to me for balloons for her son's 2nd birthday party. She had already picked up her cake.

Woman (grumpily tossing her balloon choices at me): Ugh, I can't believe the bakery.

Me: Oh, is there something wrong?

Woman: Yes! LOOK at this cake!

She opens the box. It's a nice looking cake, decorated with icing and trains. A scrolling script says: "Happy 2nd Birthday Jackson!"

Woman: IT'S IN CURSIVE! WHY THE F#CK WOULD THEY PUT IT IN CURSIVE? HE'S TWO!

Me: Oh...well, it'll take me a couple minutes to fill these balloons. I bet you could take it back, and they could scrape off the old lettering, re-frost the blank space, and rewrite it for you.

Woman (clearly hasn't heard a word I said): I CAN'T BELIEVE SOMEONE IS SO STUPID TO THINK THIS IS OKAY!

Me (yelling above her): CAN YOUR SON EVEN READ?!

She immediately fell silent, blushed a deep purple, and was silent while I filled her balloons. She paid without a word.

rachelmaryl, I nominate you for a Retail Balls Award, good luck!

Good luck in your future, rachelmaryl! That mom should be embarrassed for putting up a fuss over something as trivial as the name on a cake! I understand if she got upset if the name was misspelled but the kid is 2 years old and does know his name but he can't write it.

It's in cursive because that's the only way writing with icing looks good. Have any of you out there (I'm talking to you lady, with the 2 year old) tried to print a message on a cake a pastry bag filled with icing? It's guaranteed to look hideous.