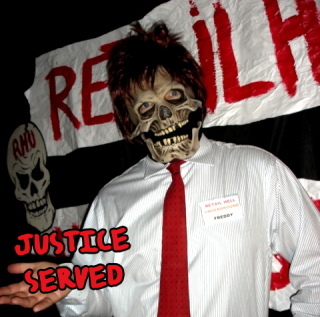 I was 18 and in my first "managerial" job. I.e. Swing Shift Manager at a fast food burger joint. Like every place, we had a couple of "usuals" who were assholes for the sake of being assholes. One of them, an over-the-top egregiously aggressive woman who found fault with everything, would go ballistic if you so much as failed to address her as "ma'am" in every sentence.

Things came to a head when she was so rude to one of our counter clerks that she made the girl cry. I told the girl to go back to the break room and take a breather, and then calmly informed the woman that she was no longer welcome in our store. That triggered the nuclear option. I waited for the screaming and cursing to stop, waved her to the door, and then watched as she left.

I sent Corporate her CC number and license plate info, and they sent her a "you're banned from ALL the stores" letter, filed it with the local PD, and told us to call the cops immediately if she ever showed up in our store again.

Which she did. A few weeks later, she showed up ready to launch into another tirade for whatever imagined offense might occur. We politely kicked her out despite her screaming that the do-not-trespass order was fake, wasn't legal, didn't apply to her, her lawyer said ... It happened again a couple of times, but eventually her luck broke and there happened to be two cops on their dinner break in the restaurant.

I was on shift that night. And I can tell you that I have rarely been so satisfied as when I showed the officers the order, identified the woman as the person referred to in it, told them about the frequent return visits and then watched them arrest her on the spot.

Best of all, I never had to testify- she went totally ballistic and scratched a cop's face. No need to book her for trespassing when resisting arrest and cop assault were so convenient!

Now, the vast majority of this story is Instant Karma. So why am I posting in /r/pettyrevenge ? The answer is simple: After they hauled her away, I noticed that her car was still in our lot... Oh yissss. That call to the towing company was the most satisfying two minutes of my young life.

Sure, I could have just let it sit there until she came back for it. But make my register clerk cry? Yeah, enjoy your trip to the impound lot... ma'am.

You deserve a Retail Balls Award!

Heehee... so much fun when not only do they shoot themselves in the foot, you get to hold the foot up for them... then make them walk to the car.