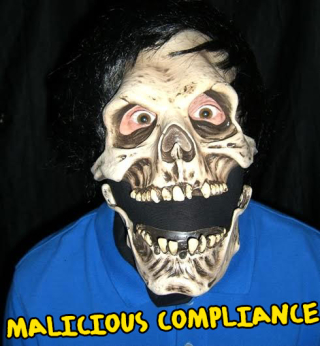 I was talking to a friend of mine and was reminded of this situation. I used to work for a big box electronics retailer in the warehouse. My general manager pretty much hated me and the feeling was mutual. For several weeks she kept insisting that my truck crew was slacking and going too slow when we unloaded trucks.

What she didn't realize was that I had friends at the corporate office, so I emailed one of them and asked if they had a breakdown of timings. Fortunately he did, and sent me an excel sheet that covered literally every contingency, and allowed me to predict exactly how long it should take us to unload a truck.

As I suspected, not only were my guys not slacking, they were actually finishing the truck around 30 minutes faster that corporate had allotted.

So I emailed her to ask her about clarification regarding our truck timing and mentioned that they needed to hydrate due to the temperatures outside and the work they were doing.

She replied to my email, telling me that she didn't care about hydration, but that my crew absolutely had to have the truck finished in the time allotted by corporate.

So, the following truck we unloaded everything into the warehouse, then took a 30 minute smoke break and drank water before going back in to finish up. My crew knew I was feuding with the GM, so they were well behaved, but amused.

She hauled me back into the warehouse and started yelling at me, and I pulled up the excel sheet, along with the email she sent me. I showed her that we were 30 minutes faster than corporate thought we would be able to handle it at this point, and that since she didn't care about hydration, I made the decision to allow my crew to drink water as necessary, provided they were within corporate guidelines.

She turned red, glared at me, and stormed off.

We continued unloading the truck for the rest of the time I worked there exactly the same way, as long as we were faster than the spreadsheet, my guys took a smoke/water break for as long as standards said they were still faster than they should be.

Refusing to allow hydration should have initiated a call to corporate AND a complaint to OSHA.