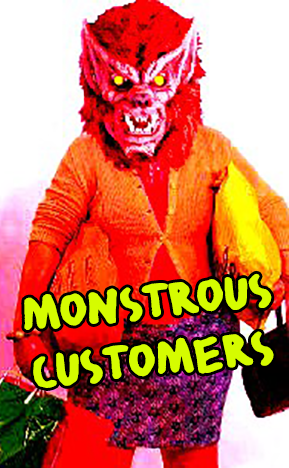 From u/nicocacolaaa  Tales From Retail:

I work in a small clothing chain based in the Midwest. We’re big enough to have a system that records customer information, which is used to mail out coupons. We can’t look up customers’ “rewards points” or anything like that. About a year and a half ago, our system update began allowing us to look up receipts from previous purchases under the customers’ names, but it’s a pain to use- we use it sparingly and still require a receipt for cash back.

So our most infamous serial returner, who returns something from absolutely every purchase, comes in with a box of winter boots, about a month ago. She doesn’t have a receipt, which means I can only give her store credit for whatever they scan for. I tell her this much. They’re originally $110, so I think she had high hopes. They scan for $32.99. She’s upset, actually looks like she might cry. “But they were originally $110!” ...sorry. She decides to keep them, and leaves.

Fast forward to about a week ago! As soon as I see her come through our door, I know she’s going to return something. She always does. Sure enough, she has the boots. Presumably in the same bag as last time. I’m kind of busy at the moment (on the phone, I think), so she sets them on the counter and begins searching the clearance racks.

I open the bag, and there’s a receipt for a completely different store. Not even a similar store. I don’t know if she thought she was going to fool me, or what. I again tell her I can only give her what they scan for. She spends the $32.99 on other clearance items, uses a coupon (because she wouldn’t be caught dead paying full price for anything), winds up owing like $5 or whatever. Makes several bitchy comments such as, “I don’t know why you can’t just look it up in your system! You have all of my information in their anyways!”

After she left, I was so salty about the entire situation, I spent the time under her name in the system going through every single transaction until I found the one with the boots. She had paid $17.49!!!!!!!! I was infuriated! They had probably been on clearance for the $32.99, then we had a 50% off on all clearance sale, or something similar. And she was pissed at me that she couldn’t get the entire $110!!!!!

I told my manager, and we figured out a way to remove her from the coupon mailing list. Finally. I’m sure in a month or two she will realize something is up and either complain to us, or call our home office and complain about us, but we will cross that bridge when we get to it.