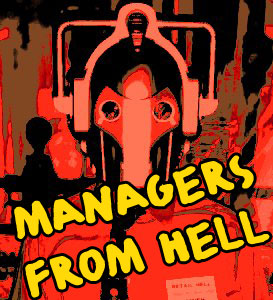 Angie arrives in tech support and starts work. A few tech support underlings had moved her machine down the previous evening but, from what I had heard, she had had another chewing out session as she preferred her monitor on the left hand side as opposed to the right. OK, a simple mistake to make and one which is easily rectifiable - but apparently not without a lot of noise and assurance of stupidity.

I did wonder why I found our resident work experience kid close to tears in the men's room.

I sat down and began my day. At 10:00, my first interaction with this hellhound was imminent. I was busy tapping out a response email to a remote worker about an Excel problem and she beckoned me over.

Well - I say beckoned... she clicked her fingers and with an impertinent commanding tone, she scowled, "You! Come here!"

Thinking I couldn't possibly have had enough time to annoy the woman yet, I assumed this was just another vulgar display of power (sorry, been listening to Pantera this morning). However, she then demanded I show her how to access her email.

Now, I'm used to running IT inductions and showing new users the jig, but someone who's been here for 10 years? Hmmm.

So, I managed to show her where Outlook was amidst the utter blur of icons on her desktop, adorned with a background of her several pitbull terriers - figures!

As Outlook ungraciously churned into gear, she immediately snapped, "Why does it take so long?" 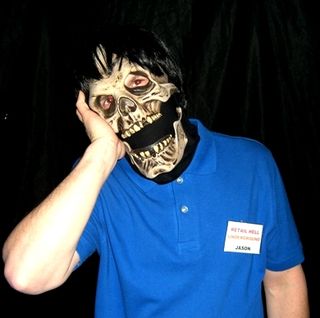 OK, in fairness, this was taking ages! Her disapproving sighs as I attempted to determine the cause was all the signal I needed to know that I really hadn't impressed the boss from hell. Task manager showed Outlook knocking on 97% CPU and the hard disk was going nuts. Until I noticed that network packets had also rammed up.

Mustering up the voice to break through the blackened, icy air, I politely inquired "When is the last time you opened Outlook?"

This was met with a sharp stare and "Don't be stupid. Why would I ask you how to use it if I had been using it already?"

After waiting several minutes, the cause eventually became clear. Angie was presented with approximately 5 years worth of completely unread communiques - an unsettling amount of them marked urgent, or with subjects implicating fatal consequences had occured totally without her knowledge.

As I said, Angie had headed drug safety for a decade. In that time, she had never seen a single email, nor did it seem had she ever think of any cause to question why!

And now she was in our realm - infecting our happy little team with a blackness mired with incompetence and only a tongue sharpened with the stones of hell to act as her only contribution.