Tech Support Hell: Her Memory Was Wiped... No, Not The Computer Memory... 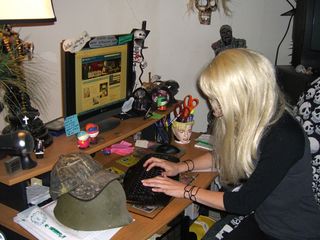 When I was doing computer support at a local University, there was a faculty member who, while somewhat cyber-phobic, learned quickly. She was up to speed with Office and Windows 95. Then she ordered a new computer.

She was very concerned about losing files, so I made sure not only to backup her stuff but also to replicate the directory structure, the desktop, everything. To make sure that she would be comfortable with the new system, I even kept her old monitor, keyboard, and mouse on her desk, to prevent any "look and feel" changes from throwing her.

Well, two days later, she calls, in tears, hysterically sobbing. She couldn't use her new computer. I took a look, and everthing was just as it should be. Windows 95 ran, Office was here in all its glory, her documents and presentations (and their shortcuts) were all in place -- everything works.

Me: "Why not? It has the same programs, the same operating system, the same documents, everything."

Her: "Yes, thank you very much. But I can't use this computer!"

Her: "Nothing's wrong. I just can't use it. I don't know how to use new computers."

For some reason, since this was a new computer, she forgot everything she had ever learned about all the applications she used to be proficient with. She had to relearn everything.

She had to be taught how to use everything all over again. She even asked that all her documents be printed out so she could retype them.

The irony is that she is a well regarded expert in the field of human memory systems.