Amusing Customer Reviews: a 5 Star Review From An AirBnb
Order Unites the Customers of McDonalds

11 Types of Customers You Meet Working in a Drive-Thru 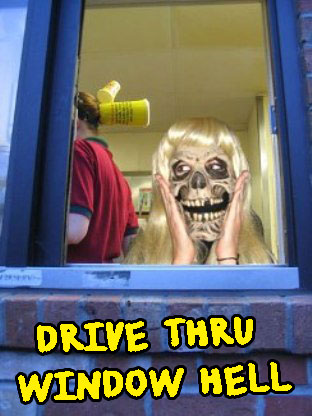 From Twink, October, 2009:
My freshman year of college I was assigned to write an "Example" essay for English.  We were to pick a subject, and give various examples that fit said subject.  I chose to go with something I was hugely familiar with.
The various types of people one interacts with at a drive thru. See if you're familiar with any of these.
Snatch and Grab
They think that if they don't take their stuff from you the instant you put it out the window, you'll take it away forever.  When they take an item from you, you almost feel compelled to make sure you've still got all your fingers.
Permanent Grumps
You smile, you greet them, you try to engage them in conversation. Yet nothing you can do seems to make them smile, and more often than not, their mood rubs off on you.
I Forgot
You ask them at several points in their order if they would like to order anything else and they say "that's all thanks", and then when they get to the window, they always seem to remember something they forgot to order literally 15 seconds earlier.  They apologize profusely, and you tell them that it's okay, when inside you'd like to smack them because they're making your time average go up.
I Cant Function if I'm Not on My Cell Phone
Throughout the entire order, you're unable to tell if they're talking to you, or the person on the other end of their phone call, and because of that, their order is almost always wrong on some level, but they swear it's your fault. 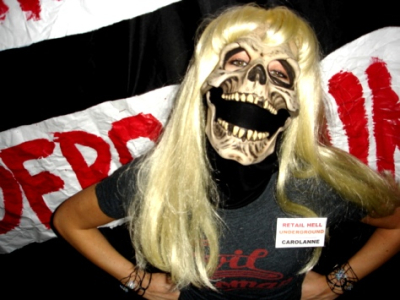 Drive Off Before They Get Their Total
The instant you verify that their order is correct, they pull forward towards the window before they can get a total, and the very first thing they ask you when you open the window is "How much was it?" (I had a boss who actually let me answer them with a sarcastic "Oh I'm sorry, didn't you hear me when I gave it to you?")
You Cant Build a Building Right
They pull up to the window, with around a foot of space between the outside curb, and their car window, and claim that they do so because your company cannot build a building properly and it will damage his car.  You nod in understanding all the while thinking "No you just can't drive you stupid prat".
I'm Above You
When you try to make conversation with them while at the window, they refuse to talk to you any more than necessary, as if you're beneath them, and they're afraid that speaking to someone in your position would tarnish their social status.  These are the most common causes for a cashier to shut the doors and mutter "bitch" or "asshole" when this customer drives away.
I Drive a Diesel Because They're Popular
They trip the speaker, and your ears are instantly assaulted by a loud rattling noise.  The customer will actually attempt to order while the truck is running, and is stunned when you ask him to turn it off.  These trucks are usually tricked out and impeccably clean,  which instantly tells you the truck wasn't bought for functionality. 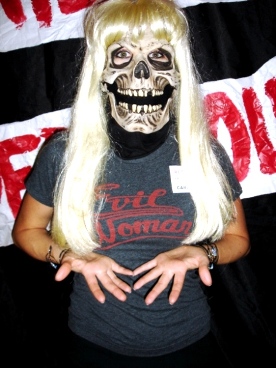 I'm 16 So You Betta Recognize
They're young, have recently gotten their licenses, and think they're a complete badass because of it.  They often think that the car makes them better than everyone else, and they have a right to treat you however they feel.
I Think Drive Thru's Are Private
My all time favorite people.  They don't realize that when they trip the speaker, even though they cannot hear you, you can hear everything they say while they're sitting at the speaker.  Their conversations are often a source of amusement for anyone wearing a headset during a particular shift.
I Want to Talk to The Steering Wheel/Order Through my Window
They seem to somehow think that either you can hear them through their window, or that the steering wheel has some sort of wireless connection to the drive thru speaker.   They almost always get frustrated when you ask them to speak louder.

And there you have it.  Did I miss any?

(BTW....I got an A on the paper, and my professor asked for a copy of it because it was one of the most original topics he'd ever seen).

"Permanent grumps: You smile, you greet them, you try to engage them in conversation"

I don't want an 'experience' when I go to get food. I will be reasonably pleasant, but you're not my friend and I don't want you to be. I want to go, order my shit, get my shit, and get home. If I wanted a friend I'd be inside, not in the drive through.

Except it is not one customer. It's EVERY ONE OF THEM!

You missed that you are not my friend, and if you'd stuck to Hello, what I ordered, price and bye, it would have been a neutral experience for you.

I don't laugh at lame jokes, only funny ones, so you think grumpy, because your joke was lame. I would laugh if I saw the worker behind you picking their pants out of their butt crack where it's been stuck for the whole time I was at the window. I'd also laugh if some lady dug out her wet sweaty boob money.

I feel compelled to honestly tell you everything about what you ask, so I try to not engage with you for your sake. Isn't that baby cute? It look's like a monkey and I have to say that. You think grumpy, when it's compulsive honesty.

In Wayne's World movie, Stan Mikita drive thru had a sign stating that if we get your order wrong, you don't have to pay. Wayne & Garth attempt to fuck up their order, but it backfired in the end.

Leo Getz' "They fuck you at the drive thru..." from Lethal Weapon 2 comes to mind.

Last night, my sister wanted chicken nuggets, but the drivethru menu is a bitch to read, so she ended up getting a 6pc nugget kids meal. Yes, she is an adult, but who cares? She did had to specify that the toy was for girl, although they would be happy to toss in a boy toy instead.

And there are those who collect those toys to try get every one of them, like I did for Bonkers years ago.
I had to laugh when a fastfood place had a few video games featuring their mascot for sale, via promo. One guy did manage to get all 3 games in one go. Years later, I found those same 3 games at a pawn shop. I could see why they sucked badly.

Don't forget the crossover stoner: They order the Big Mac and Whopper at Wendy's, think its funny as hell, or get irate when you tell them this is not McDonald's....

Most would rather go thru the drivethru, than actually go inside to get it to go (I tend to go this route, since it gets me out of the vehicle for a bit), as they're afraid of this happening if they went inside: https://www.youtube.com/watch?v=tC3XtLH1Kvo

I'll try and collect the toys when they're something I'm interested in, like McD's currently has My Little Pony stuff. Their MLP toys are actually surprisingly good quality, and less stiffly posed than some of the official merchandise.

McHell Manager: That's because their wetware can't process input and output at the same time... they can't read the menu and say what they want all at once. :P I pretty much always order the same thing, so I sometimes go too fast, but apologize for doing it if I realize.

Honestly, I was hoping Rainbow Dash was included, as it showed her image on the drive thru menu. But ended up with Apple Jack instead.

I bought a few mlp toys from walmart, these where the ones in small invidual packing for cheap. My sister took the Rainbow Dash I had, but still have the others somewhere.

McD did have Hello Kitty for a time, so I got one of her sledding.

I still have a Rock-A-Doodle toy from Dairy Queen, still sealed. The extra I had, of the same toy, was opened up.

And yes, Burger King had 3 xbox/xbox 360 games featuring their King mascot. Games were: Big Bumpin', Pocketbike Racer & Sneak King. Found all 3 at a pawn shop for like $2 each some time ago. The games can be played on either original xbox or xbox 360.

Dominos Pizza once had a game where you played the Noid... this was back in the days when CGA (Four out of 16 colors on the screen AT THE SAME TIME!!) was a thing. It was godawful.

I'm surprised they don't have Dashie, usually the one that gets left out is Applejack, probably because of her hat. I've got several Rainbow Dashes from McD's on my desk at work, along with a set of princesses. I have Starlight "Mary Sue" Glimmer, but never bothered to take her out of the bag. :P

There was no way I was gonna take Rarity, as she was already being rarity.

This was a bin under a shelf or 2 that had a bunch of toys in them.

I extremely had the 'guess the product until you open it' offer. I bought an Assassin's Creed mini bag, and it randomly gave me the rare one, on first try. A Gamestop employee was a bit pissed that she didn't get the rare one, but I kept it anyway. She had the other minis, though.

Nice. :P I think employees are at least part of the reason for the blind bag thing... I know there've been cases of all the rare-pack figures 'mysteriously' vanishing, but there's plenty on ebay, for ten times the price...

They told me that a couple people bought a whole bunch of the Fallout minis.

They let me open the Assassin's Creed mini in the store...after I paid for it first.

I seem to recall a bank having a drive up window, which later was blocked off by a yogurt place. When pizza hut took over the location, they reopened the drive up window.

The bank moved, while the yogurt place went out of business. The building has a grocery store right across the street.

I think this might have ended up on the wrong post.:P