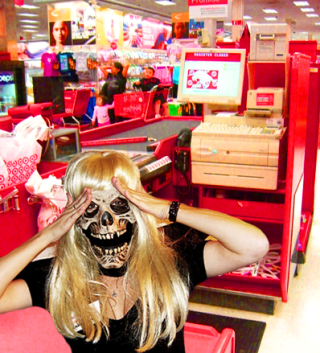 Kind of funny story I thought I'd share-- and it has a happy ending!
We're allowed to wear Holiday t shirts and sweaters and such to work for the month of december and I was taking up the company's offer by wearing a Hanukkah t-shirt that poked fun at a secular Christmas tradition- it had a bunch of presents in front of a big menorah and it said "Santa Schmanta" on it.

Of course, in order to make sure that all people continue to take themselves too seriously, a lady decides to find my tshirt offense. She spews off all sorts of anti-semitic stuff and says i'm the spawn of Satan, destroying good Christian principles like Santa Claus.

The two ladies started yelling at each other, and the anti-semitic lady threw a punch (well, it was more of a limp slap with two inch fingernails, but you get what I'm saying) and these two ladies end up in an all out, rolling on the floor, scratching, hair pulling, catfight, right on the front end of the store.

I call security, and they call the local police. Security separated the two women by the time the police got there, and the police walked them out, and asked them not to return unless they could behave themselves.