Signage Slip-Ups: Hours of Ooperation
Domino's Has a 420 Lunch Special

Dumbass Customers: "Why are the prices different??" 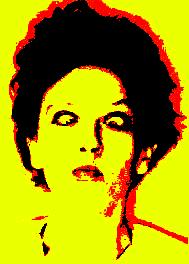 I was at the Lazy N, and was standing behind a customer at the E-bar, waiting to get a mocha. The customer initially ordered a tall latte. The barista marked up the cup and then said "$3.42 Please!"

The customer gawked and said HOW MUCH?

The barista repeated herself, and the customer counted her change, and the barista said "Would you rather have a smaller cup? It's less money?"

The customer stood there, clearly boggled, and wanted the prices repeated. So the barista obliges. Then the customer asked "Why are the prices different??"

The barista held up the cups and said 'well, one cup is bigger than the other, so...'

The customer then pointed to a cup and said "It's not fair there are different prices!!!"
I wish you could see the look on the barista's face, I wanted to laugh, but I initially thought the customer was kidding.
(I think anyone who's worked with "the public" has shown that face before they developed their poker face a little better.)
When it was my turn, I told the barista I wanted a tall, but I wanted the universal price, she laughed and said "Nice Try!" I guess I go there too often??
--Dianne