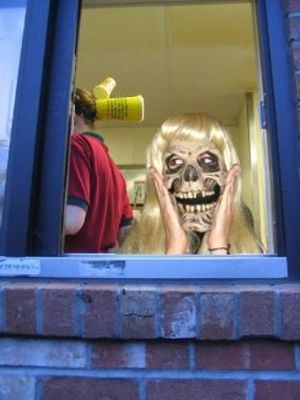 I work for a fast food restaurant and after reading your site for ages, I finally had to submit.

I deal with all sorts of people, some of them ruder than others, but this woman topped the cake enough for me to want to submit.

At our restaurant, due to how it's positioned, we have two drive thru lanes, and thus two speakers to take orders from.

A lot of times, when you're on the 2nd shift, we don't have enough people to have one ordertaker per speaker, so we oftentimes end up having one person taking orders on two speakers and taking money.

So last night, I'm doing just that, which I don't mind doing, except that it was raining hard.  Now, due to how the speakers are positioned that water bounces off of them and can get someone wet, but I consider that the price that someone has to pay for thinking they're going to get their food faster by going through drive thru instead of coming into the store (It's actually not faster).

People who come through the drive thru line are typically regulars and they understand and get over it.

So I'm attempting to take her order, but I get interrupted by a person at my window.

Stupid idiot who thinks that a female fast food worker isn't worth listening to and who just read the pre tax total of their order and wanted to complain about it.

Yah, well, next time actually listen to your freaking drive thru attendant.. no, I'm not important, I only have to make sure that your food is even rung up right to begin with, lest you annoy me and I ring it up wrong out of spite.

Anyway, I get interrupted and lost track of this woman's order, so I apologize and ask her to try to repeat it.

She gets increasingly agitated and pissy over the speaker, and whines about how she's getting all wet.

Finally, she has enough and asks, "Do you want me to go to another (restaurant name)?"

So she drives off, but not before driving around to my window and bitching me out there.

She made herself out to look like an ass, because I had the next 3 customers ask me what the hell was wrong with this woman.

I almost would have had sympathy for this woman too, because I know what it's like to have to sit there and get wet (thanks to people not turning off their windshield wipers when they get to a drive thru window-- thanks everyone!) but she had to go and act like an ass and then try to get the final word just to make herself feel superior.

I swear I hate drive thru customers.

"Do you want me to go to another (restaurant name)?"
"Could you? That'd be great."