Hellspawns Caught in the Act
Merchandise: Every Harry Potter Fan Ever Just Yelled, "Damn It!" 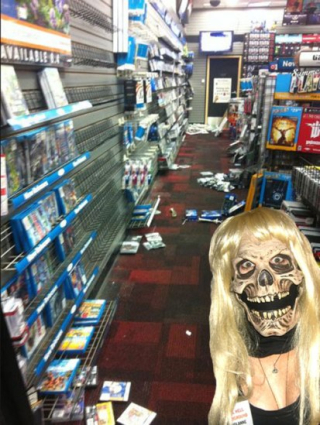 Yours truly had her first true work experience at a video game store during the holiday rush of 1998. That got me some experience on my resume, and also gave me a little extra spending money for the holidays.  Of course, it gave me a look at the inner workings of the hell known as game stores! It was a fun experience for the most part, but there were some things that really got to me.  What were those things you ask?  Read on!
#1. Legend of Zelda: Ocarina of Time
Yes, the Zelda game considered by many to be the best of the series.  It's been out for awhile now and many still continue to sing its praises.  Of course, what a lot of people probably will never realize is that there was a major shortage of cartridges back when it first came out.  Me working in a game store made me very painfully aware of this.  We constantly had people asking if we had the game in, and we had to turn them away saying we were sold out and didn't know when we'd be getting more in.  We did have a pre-order binder, though, where you could write your name and phone number and we'd give a call when it was in.
One man, however, was very determined to get himself a copy of the game at any cost necessary.  He came in and claimed that he had a pre-order.  When the manager told him we didn't have any, he claimed that he remembered putting his name in the red binder.  That was when we caught him, because our binder was black, not red.  He continued to insist it was red and that he had put his name down.  Eventually, he got the message that he wasn't going to get it and left, empty-handed.
Eventually, Nintendo of America started making more cartridges available for the general public, while yours truly got her copy for Christmas.  But that was one pain of Game Store Hell that I'd like to forget about! 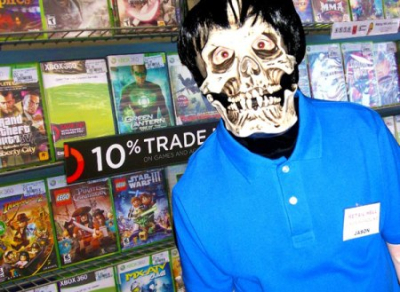 #2. Pokemon - The Craze Begins
Ah, yes, Pokemon.  The craze of catching all of those creatures, while they spread onto your lunchbox, your t-shirt, your pencil box, etc.  At the same time, they've got their own card game, their own television show, you know the rest, right? Well that started in Japan in 1996, but it wasn't until the holiday season of 1998 that it came out in the United States.  Starting with the television show, along with the two Game Boy games, Pokemon Red and Pokemon Blue.
Of course, those sold out like wildfire, and when we got more copies in, they sold out again.  I had people calling in looking for it left and right.  Usually I told them to 'call back Friday.'  But I'm sure at least one person called looking for Pokemon Green! I believe I wanted to tell them, 'We're not an import store!' but I think I just told them, 'Sorry, that one was Japan only.'  I didn't want to lose my job for being sarcastic.
Like Zelda: Ocarina of Time, Nintendo of America started releasing more copies of the games.  I got my Pokemon Blue the following year for my 19th birthday.
#3. Hellspawn
Yes, one thing game stores are known for attracting are hellspawn.  We have the ones who take boxes off the shelves and don't put them back, those who think we're a babysitting service (which is why we had to lock up the controllers for the demo kiosks, because parents would leave their shits there while they went shopping,) and the kids who think they can just ask for whatever they want and expect us to let them play it for free.
Once I watched a child (about 4 or 5 years old) come in with his mother and see a brand new basketball game for the Super NES (this was back when the N64 had been out for a couple of years and the SNES was in its last days.)  When asked how much it was, the person on duty said it was $40, and the mother said the kid didn't have enough.  Of course, children that age don't know their basic numbers yet, so all he heard was the number 'four.'  He proceeded to take out his dollar bills and count to something like eight or nine, then went, "HA!" as if calling his mother's bluff.  The mother replied by writing with her finger, 'four zero.'  Naturally the kid left without his game, but at least he didn't throw a fit about it.
Another time, we had a couple of kids who were like five or six come up with the case for the original Grand Theft Auto (this was 1998, way before the series went 3D,) and one of them said they were going to buy it.  The assistant manager refused, saying that it was not for children.  One of the kids said that the woman nearby (the mother of one of the kids I guess, the other was a sibling or friend maybe?) said that it was OK.  So the assistant manager walked over and showed the game to the woman.  The kids walked out without their game.  No fit here though.
There was a hellspawn explosion that I heard about through my manager.  It was one day, a little kid came in and took a Mortal Kombat 3 Genesis box (the store dealt in used games from classic consoles through the NES) off the shelf and was holding onto it.  The mother said that the kid wasn't getting it, and it took her awhile to get the kid to put it back and leave.  The whole time, the kid was screaming his eyes out.  I don't know the rest of it, but I can imagine the little hellspawn would probably have given me mental scarring for life!
May all your custies respect the ESRB and all that stuff!
--Misty Meanor