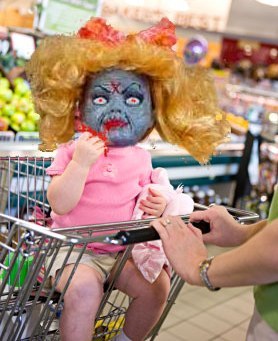 I've had to listen to a lot of screaming kids while working in a grocery store, but this one incident drove me, and nearly everyone in the store over the edge.

I believe it was a Saturday morning. We were working like good little Retail Slaves when we hear the faint cries of a child. Over the course of a half an hour, the cries grew louder into screams as the shopper got closer to us. I wasn't sure if it was a human baby or some sort of escaped zoo animal. It sounded like a fox with smoker's lung being strangled.

Apparently this wonderful mother had brought in a screaming baby and completely ignored the kid who has been screaming from produce, where they came in, all the way to the other end of the store in the dairy department.

I'd had enough of the kid's wailing and was reaching for the phone to make a page over the PA: "Will the child of Linda Blair please report to the front for an exorcism. Thank you," when suddenly, the kid shuts up.

I found out later that as a manager was heading over to slap them both, the mother finally turns to the kid and says "If you don't calm down, you're not getting out of the cart." and the kid shuts up instantly.This bitch knew she could shut the kid up by saying this, but chose to drag it out and torture everyone around her this entire time! WHY THE FUCK WOULD SHE DO THIS? Clearly this woman is pure evil, and if I ever see her or her little hellspawn of a child again, I will chase them out of the store with holy water.

Thanks Casey! We also recommend you get a case of these: CLICK HERE.

You should call the child the child of Regan MacNeil because that is the possessed girl Linda Blair played in the classic film. I agree this woman is pure evil for letting her kid scream like that! No one wants to hear screams. As a cashier, I have a hard time concentrating on scanning groceries when kids are too noisy!