Adventures with Cartie: Who Am I? Where did I come from?
Taking Advantage of the Register on the Last Day of Store Closing 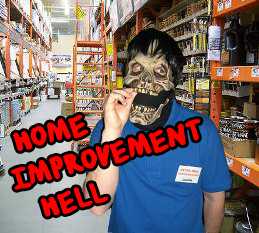 Swear to God, I don't know what gives customers their entitlement complexes, or their idiocy. Maybe they weren't loved enough when they were little. Maybe their mommies were retail slaves and were never home, thus driving them to take out their rage on the slaves of today.

I work at the OTHER massive home improvement store, although I'm a wimpy cashier, rather than a hardcore lumber-loader. ;-) I sling the occasional bag of topsoil or concrete, though. But I had a guy the other day that seriously made me wonder what kind of women he's used to. I was hopping back and forth from our tall ladders to the racks of display lamps to change burned-out bulbs, and I overheard a man saying to one of the managers who was nearby, "Shouldn't you get a boy to do that? That looks dangerous!" For one thing, I'm a lot lighter than a lot of our male employees, and can shimmy among the lights easier than them. And I guess it's ok if a guy falls and busts his head, but not a girl. My manager said that I was perfectly capable of doing my job, which I appreciated. :thumbs up:

I often work returns, which drives me fucknuts on occasion. I despise customers who obviously stole shit and bring it back, but I can't do anything about it without proof, unless the loss prevention manager is actually on top of it and puts their license in the system so it rejects returns without receipts. A week or so ago, I was working in Lawn and Garden, which also takes returns, and I had a lady ask me about replacing a plant she'd bought a year or so ago that had died. We have a one-year guarantee on our plants, so I told her that yes, we could replace it/refund it if she would bring it back. She gave me this bewildered look and said, "But it's in the ground!" Stupid bitch actually expects us to replace a plant without ever seeing it? Be a good way to stock your garden for free. I ended up explaining to to her like she was a dumb 5 year old, asking her if she would ask to get a new vacuum if hers broke without bringing it back. That made her get it, amazingly.

Then 2 days ago, I had this evil bitch who was bringing back a couple hundred dollars worth of stuff, all on separate receipts. That doesn't matter usually, you can scan all the merch and all the receipts and the system will give the money back in whatever tender you paid with. But this bitch INSISTED I do each receipt separately. I explained how the system works to her, and she snapped, "Well, I just want to do it my way." Uh, do you see a BK sign anywhere, lady? Fine, let's take 20 minutes to do your return which could have taken 5. She returned some sod, and the L&G lady asked me if there was anything wrong with it. Apparently, the same bitch had called a couple days before to get the sod, and expected us to set aside 75 squares of sod for her to pick up eventually. Garden Lady told her if she would pay for it over the phone, of course she would set it aside for her, but that was the only way. Bitch huffed and whined and paid up, then said, "You'd better pick out good ones, or I'll be back." Oh, the terror. If you want good ones, pick 'em out your damn self. I told Garden Lady she should have pissed on the sod before she gave it to her.

You know, this is my first retail job, and I've had it for over a year now. I'll be glad when I'm done with uni and can get a real job with regular hours.

I'm with TT on the subject of returns. If I ever own a business, my return policy will be "NO!" and if you're rude or demanding, I might change my policy just for you to "HELL NO, NOW GTFO OF MY STORE"