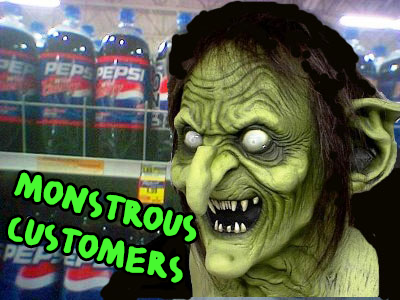 Despite the faaaaabulous mystique that surrounds me, I am no more of fashion forward than I am a fashion victim so the geek part of me rings true.

Anyway, I have worked from the likes of the KKK-Mart eventually rising to the ranks of other big fancy stores as mentioned in Freeman Hall’s book. I am no longer one of those sale lackey’s but now a clerical worker for another major retailer but still have to handle customer complaints.

During my years being in this ludicrous service industry, I’ve had my fair share of crazy custys. There is one that I would like to point out that I remember as really taking the cake who I’d like to call Dr. Dick.

Now Dr. Dick is known around town as being a complete nutjob. He comes in different locations and proceeds to return big, expensive designer items and then asks that the store hold them for him so he can purchase them at a later date.

The reason behind this I suspect is that he is waiting until he can get the lowest discounted possible for a brand name items. Cheap bastard.

Then as the weeks have passed and no contact with Dr. Dick, he suddenly pops out of the blue wanting to purchase his discounted items. Unfortunately since so much time has passed, many the items have been removed from the company and transferred to its corresponding location which is usually the outlet stores.

At this point, Dr. Dick’s true colors show as he rants and raves of how horrible the company is and how unfairly he is being treated.

Here is one example of where he completely lost it. Same scenario but this time there was a problem with his charge card and calls me on the phone to complain about his card being declined.

Dr. Dick: THIS IS DR. DICK AND I AM PISSED! YOU GUYS DID NOT HOLD THE ITEMS THAT I FUCKING RETURNED AND NOW MY CARD WON’T GO THROUGH AND IT’S ALL YOUR ASSHOLES FAULT! I WANT MY MONEY! I WANT MY MONEY NOW! 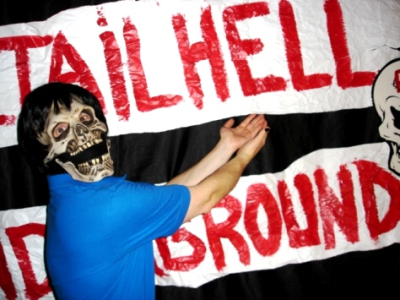 Dr. Dick: IT’S DOCTOR DICK! GET IT RIGHT ASSHOLE! I NEED MY MONEY NOW BECAUSE I DON’T HAVE ANY FUCKING CASH TO TAKE MY GIRLFRIEND OUT AFTER I BAIL HER OUT OF JAIL! I ALSO NEED TO MY BUY SON A PRESENT FOR HIS BIRTHDAY! NOW I CAN’T EVEN DO THAT!

Queer Geek: Let me see what I can do Dr. Dick.

Dr. Dick: SEE THAT YOU DO ASSHOLE!

I make several calls to his credit card company and get told from them that he does not have enough funds to finalize his transaction and now they are putting a hold on the card for security reasons and he would need to get in contact with them to get this sorted out.

I tell Dr. Dick this and here’s his response:

Dr. Dick: WHAT? YOU GUYS ARE HOLDING MY FUCKING MONEY! I WANT YOU TO GIVE ME MY MONEY NOW! I CAN’T GET CASH TO TAKE MY GIRLFRIEND OUT AND NOW MY SON CAN’T GET A BIRTHDAY PRESENT! I SPENT MILLIONS WITH YOUR FUCKING COMPANY! I AM BIG CEO OF A COMPANY! I’VE WON AWARDS….BLAH BLAH BLAH! YOU GUYS ARE FUCKING RIPPING ME OFF! YOU ALL NEED TO GET OFF YOUR ASSES AND DO SOMETHING! YOU NEED TO BE ALL FUCKING FIRED! I’M A FUCKING DOCTOR FOR CHRISTSAKE!

Queer Geek: I’m sorry Dr. Dick but you need to talk to your credit card company about this…

For the record, Dr. Dick never got his issue resolved by us but he does pop up during a full moon every once in a while and gives us another of his eloquent and educated speeches.

I never knew doctors had a vast vocabulary.