Signage Slip-Ups: Is Business Really That Bad For Girl Scouts?
What the potato chip bags look like at a convenience store at 7438 feet elevation! 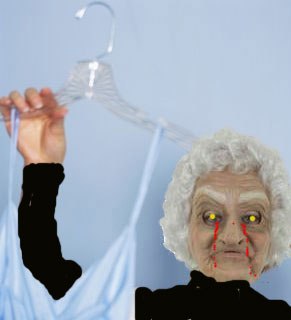 Our shop is basically a clothing store for 'older women' (i.e. over the age of around 40). I started working for a new company a few weeks back. It's ok...the staff seem nice, the hours are a little on the short side but it's a job.

Now, you'd think that these older women would have a little more class than to dump stuff anywhere they see fit. You'd be wrong. A major part of my job is picking up after the biddies. If I have to pick up one more dirty tissue from the changing rooms, I will lock myself in the bathroom with a few thousand bars of soap and a few thousand bottles of anti bac gel and scrub myself into oblivion.

The jumper table drives me to distraction.

Now, there should be 4 piles of jumpers on the top shelf with the rest of the stock hanging underneath. I don't think I expect too much of people, but it's simple to see that if the jumper is on a coat hanger on the rail, that's where you should put it once you're finished looking at it.

I spent the best part of an hour and a half re-folding and re-hanging jumpers today, because people couldn't grasp that.

What really grinds my gears are the select few who watched me finish folding and tidying, waited for me to move to the next table, then started pulling the whole display apart again.

And of course, I'm expected to smile and be all sweetness and light about it. I realized today that I've started growling at people. That's not normal is it?

And my god, who knew the amount of nut jobs we've got around here!

A few days after I started I was threatened over a purple, size 12 skirt. Not even a nice one! This woman who, by her friends admission was a few ants short of a picnic, started getting in my face and screaming at me because we didn't have it in her size.

I told her that if she laid a finger on me I wouldn't hesitate to press charges and so would my company. Then my manager raced over and told her to get out of the store.

Turns out, she'd been banned for being abusive to staff previously but nobody else had seen her come in, so I got the full brunt of her crazy.