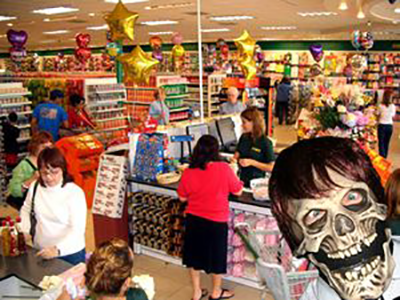 I feel I should start out by saying I'm a noob to the retail world and have been working in my first retail job for only a month.

I've been a fan, however, of sites like RHU and Not Always Right for much longer than that! I sympathize with you slaves working in jobs/circles of hell that seem intent on killing you by way of slow torture. I can call myself fortunate that that the customers and coworkers I work with are more often than not pleasant, appreciative, and sometimes even day-brightening.

I work for a dollar store that boasts the color yellow. We dress like fucking bumblebees. We're located in the south,somewhat out in the sticks. We are the only store that isn't primarily a gas station between those in the backwoods and the heart of town, as well as the nearest stop for those coming off the interstate from jobs in a nearby major city. They struck freakin' gold placing us here.

The other common breed of customer is the checkbook-carrying old woman. Usually only annoying insofar as their choice mode of payment. About half the time I need to enter the numbers in manually-- Hey, I'm new, remember? This takes me awhile! Sometimes, though, they come with the ever-critical, haggy attitude. They watch every price, complain when things aren't the price they should be, somehow think that's MY fault, and criticize how I check, bag and even speak. Yes, I'm very soft-spoken and a little shy.

My first day on the job was stressful and terrifying. Think back, old timers, you know yours was, too. The first check I ever did was with the lady I came to call Check Lady (original). I gave her her total, and glanced to see her writing it wrong by a few cents. I respectfully correct her, feeling stupid as it is.

Check Lady: Well you need to speak up. Speak proper.

So I scan the check, enter her driver's license number, D.O.B., etc, and she hadn't said a thing to me since the start. I then ask for her phone number.

WTF? Are we 8 or 80 here, lady? She spoke very clear at the beginning of all this, so I know it was all fake. Was she trying to teach me a lesson?

I saw her again some days later, caught her writing her number on the check and told her I wouldn't be able to see it while it was stuck in the machine and couldn't put the info in before.

"Well you could read it before you put it in, but most won't."

Ummm, yeah, I can't remember a whole phone number on the spot, and for sure not after putting in your driver's license number and D.O.B.

Moving on! I was fortunate enough to NOT work Christmas eve (yay!), but I did work the day after the holiday. Honestly, not as many returns as I expected, not even on our cheep little plastic trees. Except ONE.... It was busy as hell. Both registers were open and you couldn't see the end of EITHER line (oh sush you Walmart slaves, this is a DOLLAR STORE, remember? As a rule we shouldn't get this kind of busy). This traffic was all for the Christmas sales, and while we didn't get many returns, discount vultures picking at what the REAL holiday shoppers left behind wasn't much better (Is this half off? What about this? That rang up full price! I don't want it any more!) Oh yeah, I also can't void squat =/

Anyway, I get thrown in this mess the moment I clock in. A couple I've come to recognize have reached the front of the very long line with only a soda. This is a Hispanic couple who never buy much, speak little English, and are always kind and always together.

Today they want to buy their purchase with 97 cents in change and the rest with the last dredges of their EBT monies. Sure. She empties her pocket and I count it out, mostly nickels and pennies. He goes to slide his card, and as he's entering his pin one of the discount vultures leans over and asks very pointedly, "So what's the hold up?"

Do you not see the change in front of me and the man currently in the process of paying? It's not like we're getting chatty! I hardly spare her a glance as I tell her he's using his card right now. I wasn't about to dignify her impatience with an apology.

At about this point a man walks in, puts down one of our six-foot Christmas trees(in a box, of course), and informs my manager at the other register that he's going to be returning this, as it didn't work. This manager is a joy to work with, and I know you guys would steal her if you could. She's black and a bit on the round side, a great manager, a better mother, and ALWAYS cool under pressure. The following went like this:

Manager: Do you have your receipt?

Manager: Do you have your receipt?

At this point my manager is behind me at the other register, and the man is just a few feet in front of me. This is also when BOTH our registers refuse to finish processing their respective card payments, and I'm free to listen in while I try to get the damn thing to work. Apparently he did not bring his receipt, because my attention is called to them again as the man now begins to shout.

Man: What? What d'you mean you can't do anything? The tree don't work!

Manager: I can't do a refund without a receipt. Without it I can only trade a tree for a tree, and we're sold out.

Man: Did YOU keep YOUR receipt? 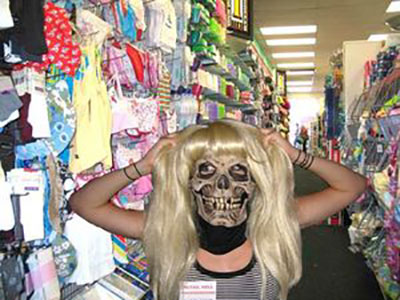 Manager: (silence, presumably ignoring him or tending to a customer, probably both. I believe this is when her register froze as well.)

Man: (louder) Did YOU keep YOUR receipt?

Manager: Sir, you're gonna need to quiet down.

Man: I'm not gonna be quiet! You jus' said you can't take it back!

Manager: I'm the manager on duty, and if you're going to be rude you're gonna hafta leave.

Man: YOU were being rude the moment I came in here!

Man: You think I give a fuck about leavin? I don't give a fuck! I'm takin' this to the other [dollar store]! *storms out, his girlfriend screeching something at us on the way out the door.*

A few minutes later during a cash pickup she tells me "I'm quitting and I'm leaving you the keys."

At least the drama served as a distraction while the system had continued to spazz. The Hispanic couple quietly apologized, took their change, and left beverage-less. We eventually fixed the problem, efficiently herded the customers out the door, and basked in the silence of a nearly empty store a solid hour of business later.

Me: I can't believe he did that.

Manager: And you didn't stick up for me! Wait till I tell your mama... =P

Me: You were handling it so well! I was about to! Really! ;o;

And so concluded my first real taste of Retail Hell. Are you proud of me? Hopefully you won't hear from me again too soon...