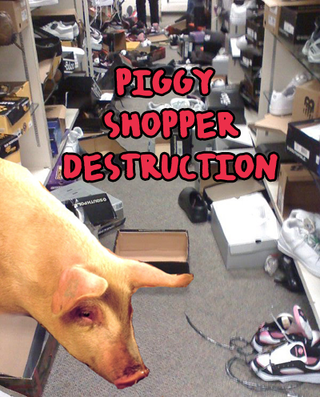 I have to vent.  Enjoy the story.

I have just had a customer – mother with toddler – come in and sit down on the seat to have his feet measured.

As she waits for me to get my measuring guide, she proceeds to dust herself off of thousands of crumbs, onto our floor.

Both her and the child are absolutely covered.

She apologized and said ‘We’ve just had a scone’ (it was more an explanation than an apology though).

Would you not shake yourself clean in the carpark? (we are not in a mall, the cars are parked right outside).

There was an actual inch square chunk of scone along with small and medium sized crumbs all over our floor.

I had to go and get the brush and shovel before her child could try anything on as it would have been mashed in and tracked everywhere.

At least she bought the damn shoes I tried on him, and she didn’t hang around.

That is a small mercy.

I was swearing so much at her out the back I was afraid she might have heard me (my colleague said you couldn’t hear me out the front, phew.  I was really letting her have it).

I just can't think how this could ever be considered an acceptable way to behave, but then I'm just a civilized human being, what would I know.

I always get someone like this just after my day off when I’m all zen just to bring me back to the reality of being a shopgirl.