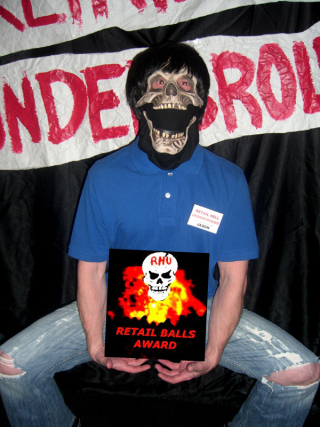 A high end department store slave gets a Retail Balls Award and MAJOR kudos for confronting a custy with inappropriate behavior. This story will make you cheer, RHUers! Enjoy:

I've spent my last two lovely years in retail hell from Old Gravy to my current job at Bloomingfails.

I've had my share of rude, entitled, to just plain stupid custys. I was lucky enough to encounter one the other day and of all the crazy retail encounters I've had I don't think anything has ever shocked me more than this.

I'm at the watch bay at Bloomingfails making everything look beautiful and such.

A man about 6'2 in a business suit comes in with his wife trailing after him. I look up and say delightfully, "Hi, how are you doing today?"

Before I even finish, he flips me the bird.

YES, you read correctly, straight up just gives me the finger for asking him how he was.

Clearly, she disapproves but doesn't apologize to me on his behalf.

After I get over the initial shock and see them in the store about 5 minutes later, I march right up to him and say in my sternest voice, "Excuse me but I don't appreciate you flipping me the bird and if you harass another associate one more time I WILL call security and I WILL have them escort you out," and walk away.

I look behind me after a moment and see him walking up to me.

He apologizes and says he thought I was someone else. ???? 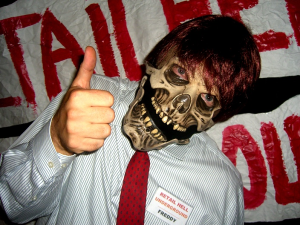 I ask who he thought I was and he said he mistook me for another associate who had helped him the other day.

Okay... still not an acceptable reason to flip off a sales associate.

After apologizing to me he hugs me.

Whatever, I got the apology I deserved.

What makes someone think it's okay to just flip off a sales associate?

Just because I work in retail doesn't mean you can treat me like shit.

I WILL call someone out, I always have,  and if a manager ever gets on my case for it I will tell them that if the company stands for abuse of it's employees, it's not a company I need to be working for.

I have many more stories to come.

Haven't come up with a name yet either.

You should've thrown him out when he hugged you. That's sexual harassment right there.