Retail Balls Awards: Instead of Returning Shopping Cart to Storefront, walmart Customer Throws it In a Ditch and Gets Confronted By Another Customer 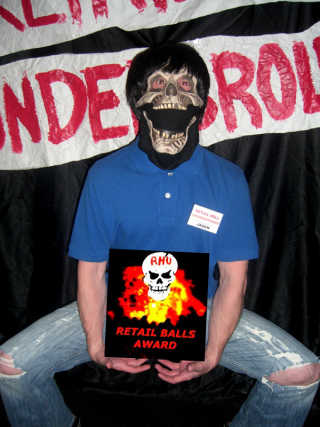 This Newbie Slave and their mother get a Retail Ball Award for their amazing Random Act of Retail Kindness when they did something about a misbehaving parking lot crusty:

Haven't worked in retail for a VERY long time, but I'm a big fan of the site, so my sympathies stay fresh.

I live in Northern Canada, and right now, it's freezing outside. I feel sorry for a lot of people in this weather, but the poor minimum-wagers who have to run around collecting shopping carts from Walmart and the grocery stores... well, they're at the top of my list. People seem to get really entitled and jerky around the Christmas season, and yes, we're all stressed out, but those people behind the counters and cash registers are people too!

Last night, I was waiting for my father in the parking lot of Walmart, and this man and his girlfriend push their cart full of bags to their truck and load it up. Then, in front of my very eyes - I couldn't believe it - he THROWS THE CART INTO THE SNOW-FILLED DITCH NEXT TO THE PARKING LOT.

Yes. He actually threw it. Picked it up, turned it upside down and threw it into the ditch. The ditch that is 2-feet deep of snow, and it's -30 outside. To make matters worse, there was an employee walking around the parking lot collecting carts at that exact moment. I don't know if the employee saw it, but he sure couldn't have ignored it - he (or someone) would have had to wade into that snow in their cheap uniform and dig it out.

So, having nothing to do at the moment, and my mother with me, as pissed and indignant as myself, and egging me on, I decided that if that guy was going to be an asshole, I would make him (and his girlfriend) feel like crap about it.

So I walked over to the truck, where they were now comfortably sitting, and waved at them.  When they looked, I gave him the finger, and walked into the ditch and wrestled the cart out of the snow.

I called "What the fuck is wrong with you? Do you know that there are actual PEOPLE who have to deal with this crap?" and he stopped the truck as he was pulling out of the parking spot.

For a second, I thought he was going to get out and come help me, yell at me, or something, but then he started reversing again, and clearly meant to high tail it out of there. 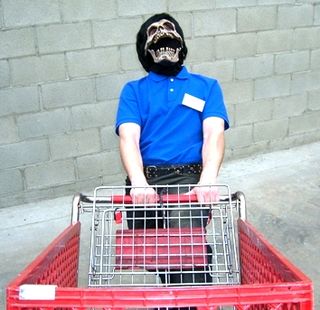 At this point, I'd (somehow) managed to get the cart out of the ditch (and the bottom half of my pants were soaked and freezing quickly), so I pushed it towards the main entrance of the store, cutting in front of his truck on my way and giving him the finger again.

I have never seen a girlfriend look SO ashamed to be with someone.

I swear, she sunk so low in her seat I thought she was going to end up on the floor of the truck while they were driving away. Even my mother flipped them off.

I don't really mind if people don't put their carts in the exact right place every time - I'm totally guilty of shopping-cart-abandonment. But I always make sure that it's in no one's way, not blocking anyone's driving or parking, and won't cause any employees a major hassle to get to it. I can't even IMAGINE why someone would think that it was alright to do something like that.

Retail slaves, I don't tell you this to blow my own horn (even if making that entitled prick look like an asshole in front of his girlfriend felt AWESOME).

I tell you this so you know that even in the chaos and stress of the holiday season, there are still people out there that are really, really grateful for the work that you do to help make Christmas (or your gift-giving holiday of choice) happen for us all.