From Brian The Werewolf, October, 2014

Tonight I went on a late night soup run. It's so cold and after a rough day, Sam and I decided we wanted tomato soup and grilled cheese. Went to Walmart and picked up tomato basil home-style tomato soup, real deli cheese and crackers.

All the self checkout lanes were full, so I went down to one of the two that was open. Got in line behind a woman in a wheelchair and a man in a blue hoodie. The man with the blue hoodie was being a little rough with the cashier, far rougher than was necessary. Based on what I could tell, he had picked up a bunch of stuff he couldn't pay for and then was berating her as if it were her fault.

Another man and his wife, total strangers, came up to the guy in the blue hoodie and gave him money, money enough to pay for what he didn't have to cover for. 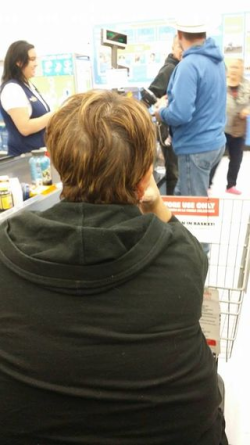 So the process started again, and when the cashier re-rang up the meat and stuff she had just had to undo, the man stopped her and told her to put the meat back. She asked him, very politely, a question to clarify because the other man had specifically given her the money to help the dude in the blue hoodie, and made sure he wanted to put it back because now it was covered.

Man in the blue hoodie proceeds to very loudly snap at the cashier and said: "What part of put it BACK didn't you fucking understand?"

The poor girl didn't have a choice but to sit there and take his abuse so I spoke up and said: "Hey, lay off."

He grumbled and growled a bit and took the extra money the stranger didn't have to give him meant to cover groceries and pocketed it, snatching it out of the cashier's hand.

After the woman in the wheelchair paid for her movie and moved out, I checked out and asked the cashier if she was okay. She said she was and said it was part of working up front. I apologized for the man's behavior and told her to hang in there. Someone's gonna go up on People of Walmart AND Retail Hell Underground.