A Gift For Our Tech Customers
Home Improvement Hell 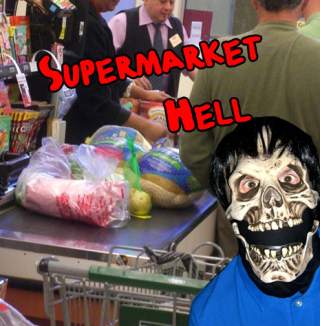 In 1995, after a long period of unemployment, I finally landed a job in a supermarket, overnights, stocking shelves. Just the fact that I was working overnights for minimum wage sucked badly enough, but my supervisor was also the biggest dick I've ever worked for. He, and his immediate subordinate would constantly berate me for not moving fast enough while they stood around drinking coffee. The stress was nearly unbearable, so eventually I told the Dick I was looking for another job. He seemed pleased.

A week or so went by, and he asked me if I was still looking for another job. When I told him yes, he said, "Well, look harder. I'm tired of seeing your face."

He even actually told me that he was going to make me quit!

Weeks went by, and I endured unbelievable levels of Retail Torture at the hands of this insufferable dickwad.

Eventually he and his cronies realized that they weren't going to make me quit, so they played their last card: a transfer to a different department. They said I could either quit, or get transferred to the front end to bag groceries. The idea was that I, being a man, would never stoop so low as to move from the uber-macho job of stocking shelves at night to the girly-man position of being a bag boy.

Of course, I was seeing it a bit differently. Number one, I didn't have to work with a bunch of dickhead Retail Nazis, I didn't have to sleep all day like a frickin' vampire, AND I got to be up front, in the sunshine, up where all the girls are.

I said, "Where do I sign?", and the next week I was up front, happily bagging away with a smile on my face.

I later found out that Dickwad had a bet withe assistant store manager that he could make me quit.

A few months later, all the Retail Nazis had been transferred to other stores, and I ended up working at the same store for five years, and was very nearly the highest-paid grocery bagger in the company.