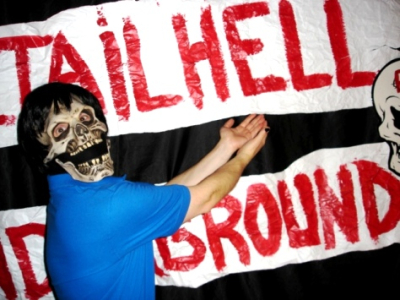 Back when I was in High School, I worked for one of the big chain video rental stores. I won’t say which one, but the colors are blue and gold.

So, this is back in the day of VHS Tapes, and we had some rather old tapes on the shelves. Some of these tapes were from the early days of VHS and were prone to a few problems.

So one day someone comes in and rents one of these older tapes. He returns to our store later that night demanding to speak to a manager.

I lead him over to my Manager who was very cool and good with these types of customers.  Unfortunately I was within earshot of this idiot while he was ranting.

Apparently, this waste of air rented one of the older videos and took it home to watch. He put the tape into the downstairs VCR and it got stuck.

“It wouldn’t go down when I put it in, and it wouldn’t come up when I hit eject."

So he took the VCR into the dining room and proceeded to take the entire thing apart.  He was specific to note that he may have broken a few pieces and so it was impossible to put it back together.

So why does this guy rank as a waste of air?

This tape having just destroyed his VCR, he took it upstairs and proceeded to use the VCR there.

Same table with all of the pieces of the other VCR on it, he took apart the second one.  Broke some of that one as well.

So he comes in and demands that we refund the cost of the tape, which she gladly does, and that we cover the cost of him getting two VCRs repaired.

In his mind it was our tape that damaged his machines, not the fact that he butchered them with a screwdriver and a pair of wire cutters.

My manager told him that he was SOL because he broke them, not us.

That guy yelled so loud at the two of us I had a headache all night.

Every VCR eventually died from one plastic wheel that rotated plastic on plastic instead of a metal bearing. Any VCR that started eating tapes it was that one wheel starting to bind. I took apart at least 10 to find it was always the same part no matter who made it. Built in appliance death by purposeful or accidental design, but I'd say purposeful.

I had a few tapes wear out, due to them being rental tapes. But they didn't break the tape at all, just the quality was bad.

I did have one tape break, but didn't go apeshit when I bought it back in. They respliced the tape so it worked properly, eventually I owned that exact same tape.

That plastic tape cover can break off, but the tape can still play.

VCRs can be picky when it comes to tapes. It might either play it, or eat it for breakfast (which happened a few times, easily fixed by opening up the tape and rewinding the reel manually), and one tape did get stuck that required the vcr to be destroyed to get it back out (repair shop did the destroying).

I had 2 tv/vcr combos not work, since the vcr on them quit working. I refused getting one myself, instead opted for a dvd/vcr combo that still works.

Good lord Fischma, I'd forgot TV/VCR combos were a thing...and I OWNED one.