Seems Legit
Retail Robin: Can't You Check the Back?

Tales From Working at a Zoo For the Summer My name is Maria, and though you have not met me, you know me, just as you know every employee at a store that gives you that look you know so well, that makes you want to lean over and grab their shoulders and scream, "I AM NO CUSTY, I AM LIKE YOU!"

I work at a zoo for a summer job in an undisclosed location in the USA.

Not retail? I beg to differ.

I worked at a ride for kids and their parents, or at a station selling feed for animals.

Screaming children every day, rain or shine, coffee or no coffee.  To add to that, it was the same CD we had to play for background music on the carousel with 16 4-minute songs that played for the entirety of an eight-hour shift. You heard that music when you got home, when you were driving, even while you slept.

I half awoke most nights seeing a line of people on the side of my bed, yelling at them to get the fuck out of my room, it was 3 am and the ride wasn't open yet.

I can deal with that. I can deal with terrible customers, rude adults, bratty children, the pounding need to get my tubes tied lest I breed one of those hellspawn; it was simple as long as I had wonderful coworkers.

For the most part I did.

This coworker was hell.

I am an ambitious, devoted worker who loves the bosses I had and truly enjoyed working for a company with the message a zoo has, and I take my job to heart. This coworker was a stoned-out slacker who showed up for shifts two to three hours late consistently, left early, took 1-2 hour breaks at a time (we're allowed 2 15-minute breaks and a half hour for lunch).  Usually there was a stench of pot about this loathsome creature who almost never actually worked even when present and accounted for.

One day, this coworker didn't show up until a hour from the end of my shift, the opening shift.  They brought moral to an all-time low when present and constantly barraged the helpless managers with shirking and complaints. 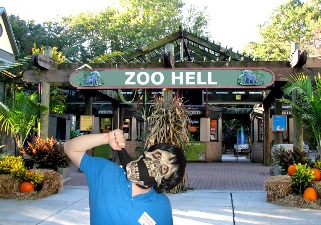 When Crappy Coworker finally quit, it was too happy a surprise.

It just goes to show how important coworkers can be to a working environment.

My dear friend who worked at a similar attraction was a true Retail Whore. She was either stationed in the large shop or at one of the three or four other small satellite stores scattered about her park.

Her management was a group of sadistic morons who knew nothing about sales, motivation, compassion, or other things you need to house a soul.

The biggest example of this was that in the dead heat of the summer, the management decided to remove stools from the satellite stores. This meant that all employees had to stand for at least four to five hours straight on their shifts, waiting between breaks.

That stools made the employees look "bored" and "unapproachable".

My friend developed chronic back and leg pains so bad that she had to take pain pills to work.

But instead of keeping it to herself, she took every god-given chance to complain to every manager that came her way and got all her coworkers to do the same.

A memo to HR was drafted telling them that she, and her coworkers would go to the state department of labor unless they did something, but before she had a chance to send it out, what should happen but the management "decides to graciously return the stools" with a list a mile long about "regulations" for the stools.

Bullshit, the employees led a peaceful but threatening uprising and you caved.