What we would really like to hand customers entering a fitting room!
Rainbow Ends 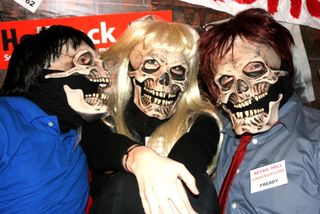 So... where to start... I guess the origin point of today's set of stories is Missy's retirement. Her last day was the 15th, folks. She's... sort of gone? She's going to take two weeks of vacation time to replenish her batteries, then she will come back to train her replacement, before winging her way completely into the ether. No idea where her next job will be. She's going to be doing a few very minor things for the store (like doing the weekly schedules) online. But she is no longer a presence in the store itself. We had two good-bye parties, one for employees and one for volunteers. Lots of speeches, many thank-yous, and many feels in which some eyes were teary. I got a big hug from her right before she left for the day.

One of the leads, Allie, did a lot of sniffling for about two hours after Missy left. Thankfully we keep a box of tissues at the registers, so I was able to hand her the box. I didn't sniffle, but I was pretty bummed for the rest of the day since she was gone.

Sadly, this is the end of any feel-goodness and warm wishes in my story. It's time for a Lemkil update.

And if that gave you a chill down your spine? Yeah, that's the correct reaction.

Allie whispered to me that Lemkil hated Missy with a passion... to the point where he referred to her as a "bitch" and a "whore" behind her back. Delightful. 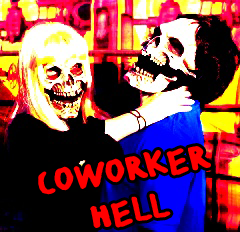 And now Missy is gone.

This were relatively quiet for almost a week. Then I hear that Lemkil blew the fuck up. I was on the donation door and sent up my bin of shoes; I was going upstairs at the end of my door shift (in like 15 minutes) and would take care of it then, I figured. I heard from two employees that Lemkil went on a rant about how people on the door should not send their bins up for others to deal with. The guy who does toys and games went to empty the rolling bin into my in-bin as a thoughtful gesture, and got an earful of Lemkil's enraged (and pointless) tantrum.

I talked to the Toy Employee, thanking him for stepping in, and that I would have taken care of it if necessary. I asked him if he was okay, and asked him if Lemkil had been verbally abusive, or whether he had just ranted ineffectually. Toy Employee reassured me that he wasn't upset over the incident, and that Lemkil had just been making noise.

Thank Thrognar. I would have felt awful if Toy Employee had been dragged into Lemkil's psychotic verbal beating over something I had done. (And wasn't even against any rules, written or implied.)

I close. That means I count down one register. There are three of us at every close. Two to count a register, and a lead or supervisor to confirm the count and fill out paperwork.

Saturday night: Whoo hoo! The tills balanced! None over, none under. Me, Steve, and Supervisor Patricia. Signed, confirmed, and sealed.

Sunday morning: Lemkil counts the tills in. Claims Register 2 was short $1, and Register 3 was over by $5. Leave notes to that effect. 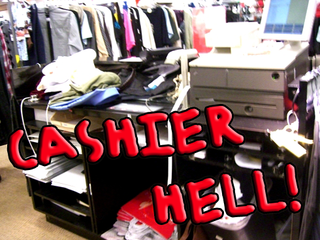 Monday morning: Lemkil again counts the tills in. Claims he found a penny in the dime well, claims the tills are $0.09 off.

We all sign off on the totals. Where the fuck is this money going if the tills are perfect the night before, 'missing' the next morning, and back to perfect that night?

I looked at Allie tonight and said, quietly: "I don't know if Lemkil even applied for the position, but if they EVER announce that he is Store Manager, I will fucking quit; effective immediately. There will be NO two week notice. I. Will. Walk. The. Fuck. Out."

Allie was silent for a beat, then said, "You wouldn't be the only one. Most of the staff would follow you."

I hope he doesn't become Store Manager. If that had happened at my place, I would leave on the spot.