So I'm just going to let you read this.... abomination from Lemkil from a few days ago. Just... read it first, then read the rest of it.... So.... Hoo boy. How do I even describe this? Potential sexual harassment? Standard harassment? Hostile work environment? I... don't even fucking know the laundry list of things this letter would have resulted in, in a corporate company. If this had been aimed at me, I would have stolen Thrognar's mighty hammer and wielded it with a scream of "FOR ASGARD!"

We have two electronics dudes. Scotty is one. The other is the subject of this... 'letter.' Let's call him James. We received a mini fridge at the door. James took it to an outlet and plugged it in. The idea was to let it run for a while and see whether it would actually chill. He left a note on it to that effect.

Steve passed by and out of random passing curiosity, opened it and stuck his hand inside to see how it was doing. It wasn't chilling. Steve fiddled with it, and discovered that plugging it in wasn't enough. There's also a switch you have to turn to "ON." He flips the switch, and the refer starts chilling.

Steve tells some of us the story, and there's some good-natured, and lighthearted ribbing amongst ourselves (James wasn't present at the time, he had some sort of minor family emergency, thus 'unscheduled time off.' The guy has two kids and a wife he absolutely adores, so they were probably involved), with most of us admitting that we've all been guilty of turning on the wrong burner on the stove before. It was a simple derp that any one of us could have done.

Nothing serious, nothing devastating, not even really a thing that will actually impact anybody at all in terms of workload.

Now you've read the actual story. Go back and read that monstrosity again. If it makes you even MORE pissed off, you know how I feel typing this. And you can imagine the horror that our poor Accessories Girl must have felt when she spotted that letter pinned to the COMMUNAL CORK BOARD in the break room for several days! She knew who it referred to, and it upset the hell out of her. She pulled it down, trying to spare James' feelings, and told one of our Leads about it. The Lead took it from Accessories Girl, made photocopies and planned to show it to Missy.

Lemkil somehow got wind that his note made someone upset and that was why his message was removed.

THIS appeared on the corkboard the very next day. 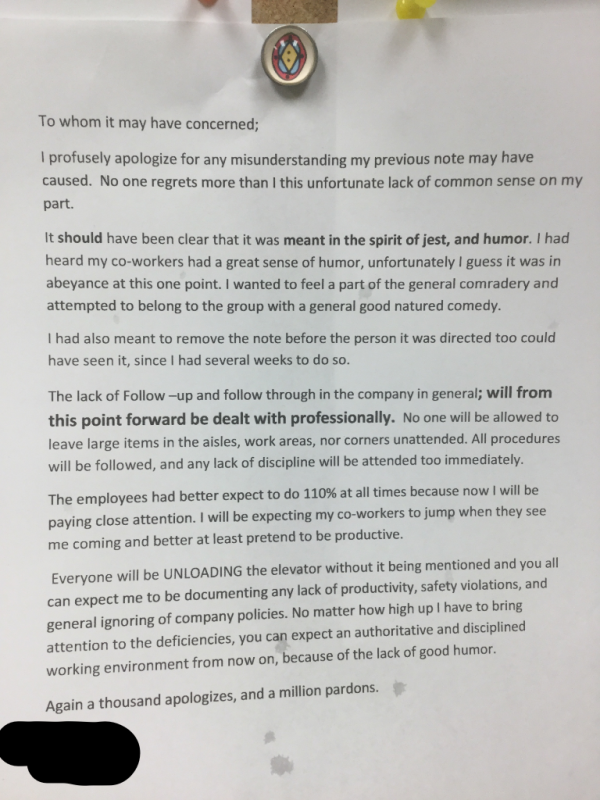 "Spirit of jest." "Good natured comedy." Mother fucker, what color is the sky in your world?!

Good natured comedy is a sympathetic grin and a mild nudge of "So I hear you forgot to turn it on, huh?" Not... that. And then the knee jerk.... passive agressive? or just aggressive? I know it's only a note, but that doesn't seem all that passive.... response to someone becoming offended.

Keep in mind, this is Lemkil.The man who behaved in a violent manner toward objects and carts, who snarled at me when I called him out on his behavior, and who has (since then) screamed 10 F-Bombs at me in the span of two minutes because HE accepted a massive amount of sports items at the door. We were not supposed to accept them for a while because there was no room, and when I reminded him... F-Bombs leveled the city.

Missy is leaving. Maybe Lemkil is mentally incapable of handling the fact that the management is changing and is acting out in some way? (This dude is in his 40's or more, so Jesus fuck, how do you get to be that age without learning how to handle change?) Maybe Lemkil doesn't want to work here under new management and is hoping to be canned, rather than take it upon himself to find another job? Maybe this is some ass-backwards way of 'punishing' Missy for leaving, by trying to force her to have to deal with him before she goes?

I just... I don't understand this... I mean, I agree that it sucks that Missy is leaving (on the 15th no less, still no idea who the new manager is...) but there are WAY better ways to handle this, even if you just want to quit.

I'll tell you one thing... if all that commentary was truthful about planning to be harsh and 'professional' to employees, and that he will be actively hunting us all down for the slightest infraction, every fucking employee will either kill him and bury the body in the field out back, or simply leave the job on the spot.

Pray for us, RHU.

How Lemkil hasn't been fired yet is beyond me.

"I did something stupid, and as a result of it being all YOUR fault, your lives are going to suck." Asshat.

I'm guessing you're all going to whine and moan ineffectually about it and do nothing at all, no matter how big the provocation from this Lemkil becomes. Maybe one of the bunch of you will grow spine enough to quit, but nothing more will happen. Because, quite frankly, what he's done so far is more than enough to drive off anyone with a bit of self respect.

Congratulations, 18 Spears, for earning a one way trip to the ban hammer.

Wow, first off the 18 spears thing. Thank god he was banned already because does he/she not realize the purpose of this blog?

Second: What the fuck? That note was not in jest. That was an outright attack.

Third: When RHU finally does shut down, where are you going to next Puppies in Prada? Because I want to keep up with your stories

Good riddance. They have been a real jerk for a while.

Seconding McHell Manager - I'd like to keep up as well.