I'm Fairly Certain This Caique Shares Our Reaction To The Explosion Of Christmas Crap Today
Adventures with Cartie: Meet Killer

Bathroom Hell: A Visit From One of Mr. Hankey's Relatives 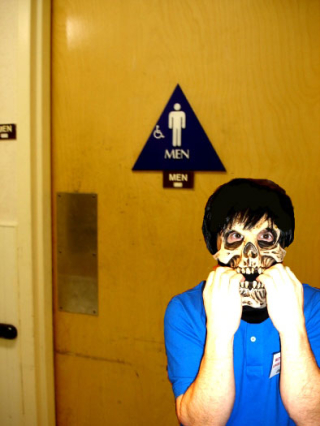 RHUer Jason in Kentucky sent us a Customer shit story to end all shit stories. It didn't happen in a fitting room, but instead in a Men's room and he gives us all some sobering advice when we use public restrooms:

"One night I was at work at a big name Truck Stop about 2 years ago. I was the Shift Supervisor and had to get the place looking good for the company's founder's visit. I asked the maintenance man if he could go clean the bathrooms. He said no problem and went on his way.

About 5 minutes later, I hear my name on the intercom to come to the back hallway. I go back there and the maintenance man looked like he was gonna puke.

All he said was follow me. So we go in the men's bathroom and he points to the middle stall.

I open the door and I kid you not, there was a shit stick figure man on the big plastic toilet paper holder.

It had a round head, body, and arms and legs. It was nasty. As much as I hated to make him clean up the mess (and there was a hell of a mess), I had to. 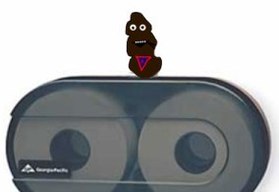 The next night, he pages me again and I go back there.

Again he says follow me and we go to the men's room. In the middle stall there was another shit figure. This time it was a middle finger with detail on the plastic toilet paper holder.

I take it that truck drivers have a lot of time on there hands (and shit).

The moral of this story is, don't lay anything (cups, phones, etc) on the toilet paper dispenser. You never know what has been on there."