Just Another Day in Retail Hell For Carolanne
Pennies From Hell 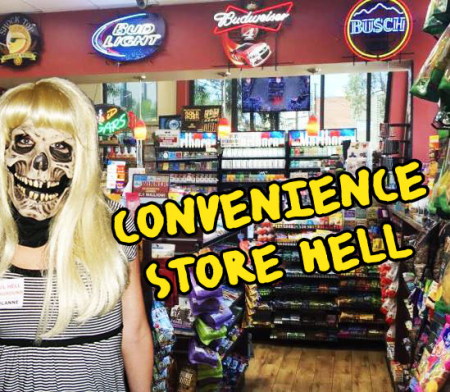 Working at the store 7 to 23 o'clock was so much fun I had to share a few of the things that happened while I worked there.

I worked the grave shift and I still remember some of the weird ones. There was the girl who came in to buy beer and presented a driver's license that gave her age as 19. In California, you had to be 21 to buy alcohol. The following conversation ensued:

Underage Buyer: Why can't I buy beer? I'm from Nevada. We can buy beer in Nevada when we're 18!

Me: You're not in Nevada, you're in California and you can't buy beer here until you're 21.

UB: I don't understand! I'm from Nevada! Why can't you let me buy beer?

Me: You are not in Nevada! You are in California and have to follow the laws of California!

This went on for about 20 more minutes. Finally I told her to leave or I'd call the cops. She finally left. Without her beer. 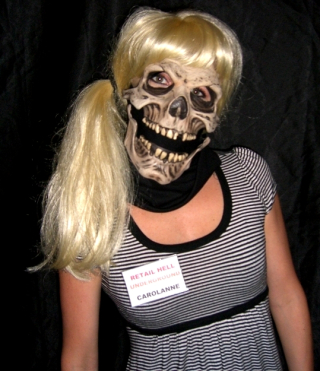 Wintertime. Young women come in dressed in short shorts and halter tops. I always kept the door open because I got so warm running around unpacking groceries, mopping the floor, etc. One of the girls is leaving and asks me, "Aren't you cold?" I look at her and what she's wearing and say, "No, I wear clothes."

I've got the store spic and span for the morning rush. Coffee is fresh, creamers are out, counter is clean. Guy comes in and pours his coffee into a cup and proceeds to put sugar and cream into it. By the time he's done, the counter is covered with sugar packets, empty creamers, napkins, coffee, and stirrers, even though we have garbage cans to the left and right. His wife wouldn't put up with that crap and neither do I. I charge him 99¢ for a 79¢ cup of coffee and smiling sweetly at him, tell him to have a nice day.

You want to be a slob at my store? Go right ahead. Sometimes we'd make $5 in extra slob fees before the morning rush was over.

Multi-million dollar lotto night. We have customers lined up around the store and out the door. The machine starts smoking. I decide to open it up, whereupon a huge cloud of smoke arises from the innards and the smell of burnt rubber assaults everyone's senses. Obviously the lotto machine is down for the night.

I tell everyone I can't sell any more tickets because the machine is burning up. Most people groan and start to leave. But one man has to ask me while I'm standing there in front of a smoking machine, "Can't you print out just one more ticket for me?" I ask him, "What part of 'the machine is on fire' do you not understand? NO!" 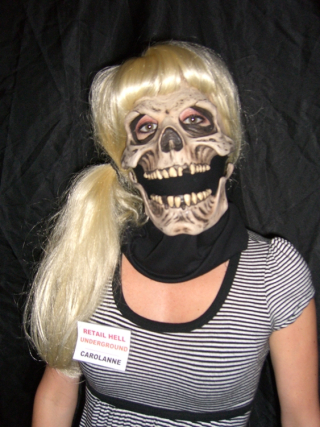 Our cash registers sat sort of in the middle of the store with the freezer behind us. One day across the street, some kids decide to videotape a guy who is juggling balls. The guy sees the kids and demands their camera. The kids hightail it across the street with the guy in hot pursuit and run into our store. Around and around our little island they all run with the kids screaming and the guy right behind them and yelling. My coworker, who is a stickler for things being in absolute order, is totally unhinged by this. He's standing with his hands clenched into fists and at the top of his lungs, he's shouting, "NO! GET OUT OF MY STORE! GET OUT OF MY STORE!"

I would have helped resolve the situation, but I was laughing too hard to do anything.

Guy came in one night when I was on grave and hands me a temporary check with no pre-printed name or address on it. He starts telling me a sob story about how he just moved here and he has no money for gas or food, so can I please cash his check. Yeah, no.

I'm off at 7am the next morning and my manager is a little late coming in, so I stay for an extra half hour. A lady comes in and lo and behold, she hands me the same check I saw last night and gives me a sob story about just moving and she needs to get gas to get to work and the banks aren't open and can I please cash the check for her. I tell her I told the guy last night I couldn't cash that check and I still can't cash it now.

Later on, one of the swing crew calls in sick and I say I'll work her shift. So 5pm, in comes the guy from the night before, same check in his hand. Walks in the door, looks at me and says, "Don't you ever go home?", and then turns around and walks back out the door.

Night shift. I can't sell alcohol to anyone I think is intoxicated, especially if they're driving. So I tell the two dudes in front of the counter that I won't be selling them their beer. Of course they argue about it. I tell them as clearly as I can that they should leave and probably not drive home. They argue. Finally they get the picture when one of them turns around and sees the two cops who have been standing behind them the entire time. Cops tell them not to drive. Guys say, "Sure, we won't drive!" and walk away down the street, leaving their car in our parking lot.

Five minutes later after the cops have left, the guys are back and getting into their car and pulling out of the parking lot. Of course, one cop has waited patiently across the street for this very thing to happen and pulls them over. "Like shooting fish in a barrel," he says. 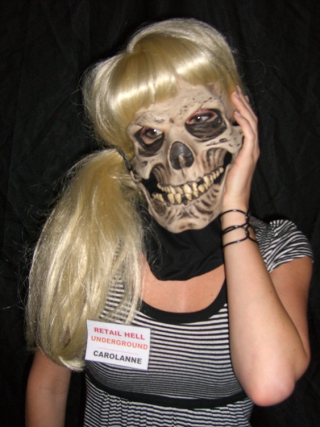 Two kids walk in and get beer. They come up to the counter and throw down some laminated card. "Military ID," one says to me. Well, no. It's a laminated Red Cross card. I took the beer down behind the counter and told them not to let the door hit them in the butt on the way out. Like I don't know what a military ID looks like. Sheesh!

About midnight one night, a BMW comes into our lot, more or less parks, and out steps this woman. She couldn't stand straight

even holding onto the car door. I sigh and pick up the phone and start dialing the cops, a number I know by heart by this time. My customer is standing at the counter telling me to just "Give her a break. She's just trying to get home. Why do you have to call the cops on her?"

By this time, the woman has fallen back into her car and she slams the door and tries to take off. Now the same customer in front of me is having hysterics. "She's not gonna stop! She's gonna hit my car! Call the cops! Call the cops!"

The cops eventually stop her and it turns out she's almost 3 times over the legal limit and she has a $10,000 DUI warrant out on her. She refused to do the sobriety test, so ended up at the jail and had to be carried in because she refused to walk.

3am. I had a guy come in and just stand there and look at me. I ask him if I can help him and all he does is start licking his hands without saying anything. Fine, I already know how this is gonna go. So he turns around and walks out and with the hair standing up on the back of my neck, I'm on the phone to the police like white on rice. As I'm putting the phone down, the guy comes in again with his friend this time. The friend is acting super hyper, running around the store, and the first guy is still standing there without a word and licking his hands again. Neither one is actually buying anything and they refuse to leave.

Then come the police. Unbeknownst to me, they had all been helping the cops in another area with a hostage situation and had gotten the call on their way back, just a block away. The two guys in my store had apparently been pestering the other town merchants all day and my call was the straw that broke the camel's back.

One police car after another came zinging into the lot, until I swear there were at least 7 of them there. The guys in my store turned white. BUSTED! 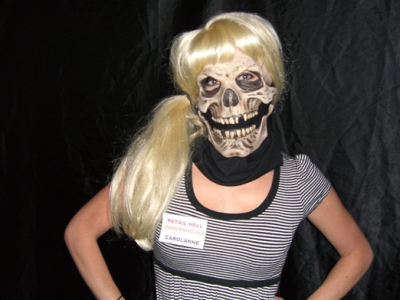 The cops used to sit across the street and keep an eye on the store. I was flattered until one of them told me that when it comes to convenience stores, when they get a 911 call, they never know if the victim is going to be the clerk or the customer. I said ha ha ha.

Anyway, they were across the street when a car comes careening into the parking lot, backs up into the space in front of the door, and idles there while a guy jumps out and runs in. Cop was there in one second flat. Customer is having a hissy fit. I tell him, "What do you expect? You back in in getaway position, leave your car idling, and run into the store. No cop worth his salt is gonna ignore that!" Customers, I swear!

After 2am when the beer run ends, things are sort of quiet. I've already checked the aisle in front of the beer cooler for money people may have pulled out of their pockets and dropped while trying to decide how much beer they can buy.  Instead of money this night, I get four younger men who come in and while one is asking me something at the counter, two of them grab a bunch of sandwiches and run out the door. Of course I go out the door after them, but stop and think about what I'm doing. Decided it wasn't that smart of an idea to run after them, so I pull the door keys out of my pocket and lock the other two in the store. Then I step to the phone booth we have right next to the door and call the cops.

Cops caught the thieves right away. They were still sitting in their car up the street, waiting for their two friends to show up. Their friends, of course, were still locked in the store. One of the cops told me they were just going to give the guy who stole the sandwiches a warning but he was such a smart mouth, they decided to take him to jail.

And last but not least, my favorite story, although it didn't happen to me. One of the clerks at another of our stores caught a little kid shoplifting. He saw the kid was wearing brand new Nikes. He tells the kid to either give him the Nikes or call the cops on himself. The kid calls the cops on himself.

You retail slaves hang in there!