It isn't very easy being the cheerful and upbeat face of a company [copious amounts of coffee are needed], especially one whose idea of 'haute couture' rooms is the equivalent of "Now with FREE color tv" [how vintage 1960s hotel can you get?] but thankfully, sometimes I can actually achieve it.

This morning, however, I may not be able to accomplish it ... despite a mug of coffee large enough I could reenact Hot Tub Time Machine in it.

So, of course when I have the least capability to deal with stressful or bitch-tastic custys is when the queen harpy of custys decides to descend upon me.

Let's call her Hunga Queen of the Harpy Custys of Talon Mountain [if you get this reference I heart you], or just Annoying Harpy Custy for short. Reeking of desperation, weasel-ness and all-things skeevy she waddles towards me; her mottled feathers [cheap dye job and possibly cheaper weave] wavering as she approaches my desk. To wit, my snarky tongue almost got the better of me whilst dealing with her. 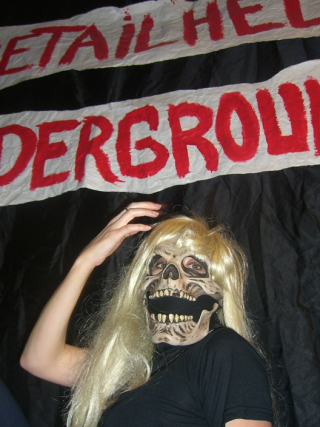 Annoying Harpy Custy: *flapping up to the counter* "Hey, is there anything in your log book about my room from the storms last night?"
[referencing the tornado which touched down in the area and massive thunderstorms - this Custy also has a history of false or over-stated complaints, rude remarks to staff and in general a distinct lack of control of her sticky, stinky, mildly-destructive, LOUD children]

Me: "Yes ..." *looking in logbook* "It says that you developed a leak in your room during the intense part of the storms and that you didn't want to move rooms, is that correct?"

Annoying Harpy Custy: *haughty look* "Well, I didn't want to as you don't have anything available on the ground floor! What am I supposed to do, carry my luggage upstairs?" *punctuating this with a hoot and a slap on the desk's counter-top*
[This is true; ground-floor SMOKING with 2 Double-beds and a pull-out couch? We only have 2 of those specific type of rooms - one of which she is in (and likely destroying).]

Me: "My apologies, we may have one open today after 3pm, if you want to switch."
At this she gets a very smug and self-satisfied, cat-that-ate-the-canary (or the custy-who-thinks-she-got-one-over-on-the-company) look

Annoying Harpy Custy: "Good." [smug, oh how smug she be] "Now, what time does Erwin come in?" [our relatively laid back AGM]

Me: "He's not really due in today, but, if he does come in it won't be until about 3pm - what can we do for you?" [smile, Benjamin; don't show teeth. Don't show your annoyance with her ... oh my gawdd, what the sweet Retail Hell is her buzz-cut-sporting, sticky child named CHUNK climbing on?! KID THAT IS A DESKTOP COMPUTER! DO NOT CLIMB ON TOP OF THAT PRINTER! Yeah, great parenting you got going on, harpy.] "Young man, please don't climb on that." I say in a sickeningly sweet voice - if she's not gonna parent, one of us hasta. 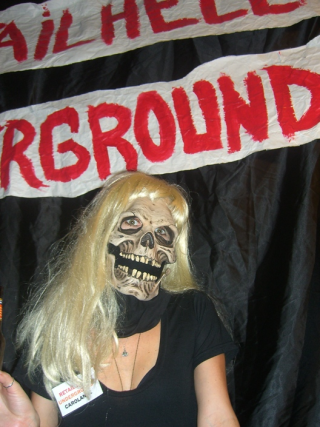 Annoying Harpy Custy: "Well, you see," she's obviously building up to something here, as she waddles and folds her wings - I mean her arms - under and cranes up her neck. "My phone got damaged last night by the rain." At this she proudly flops down her cracked-screen touch-screen phone, open and the battery removed, on my counter. "What'chu gonna do for me about this?"

Me: *quirked eyebrow* [I can still do it, despite the knock-off botox] "Honestly ma'am, I don't think we can do very much of anything, if at all. You chose not to leave the room, despite your predicament; from how I understand it, I do not believe we're responsible for -"

Annoying Harpy Custy: "What do you mean!?!" she interrupts in an inhuman howl, calling the other guano-streaked denizens of Talon Mountain, her flitting and loudly-chirping offspring, to flock to her side. "Just because I chose not to leave - I can't lift heavy objects! - why should I be punished for this? Why are you blaming me?" Her rant is all over the board in its stream-of-consciousness-ness. "The phone company won't replace my phone for water damage!" [Now wait just a nit-picking minute here, 'Mother of the Year', I've had 3 - count 'em 3! - phones replaced by her same carrier for water damage ... I call shenanigans on this.]

Me: *dialing my GM's cell phone* "Let me ask my General Manager, then. By the way, did you try the dry rice trick? I know that I've saved 2 phones from water damage with that little home-remedy." [What can I say? I have a nasty habit of damaging phones - rarely does one last more than a year with me.] To which she replies that 'yes, she tried it and it didn't work!' [Of this I doubt, as the dry rice trick takes more than a few minutes to make any impact.] I quickly outline the situation to my GM over the phone and he reiterates the conclusion I came to, backed up by our corporate policy - We offered to move her, an employee had even offered to help physically [he be the strong bitch on-staff, all Schwarzenegger'd and shit], and she had refused. As it stands, it's out of our level's hands on what we could do for her.

To say that she didn't like this is akin to describing a volcanic eruption as 'a polite burp'. 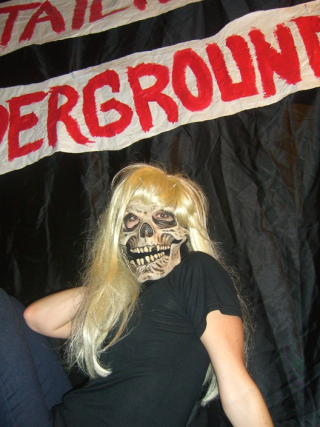 Annoying [now Angry] Harpy Custy: >string of expletives even I find too tacky to commit to screen - thankfully, absolutely no poo is flung<

Me: "Ma'am; I promise that I'll ask Erwin if he comes in and I'll double check with the GM, as I know how not fun this is, but it's really sounding like something we can't help you with. I'm so sorry," [And I genuinely am; I loathe being without my left eye, I mean cell phone ... it's kinda essential to me. I've been known to go into a shock-like coma-esque quiet state when I don't have one ... some would say me being quiet like that isn't a bad thing.]

"If there's anything else I can do to help, I shall - I'm really terribly sorry."

Annoying [still Angry] Harpy Custy: "Well," her clawed wing scraping the desk, "when Erwin or your GM gets in have them call me!" She turns her tail feathers, ruffled, and raises her wings to flap away when I can't help but ask - my curiosity picqued by her custy avian display ...

Me: "Just a quick question, if the window was leaking in the far corner of the room, how did your phone get damaged by it?"

Annoying [now Sputtering] Harpy Custy: *incoherent mutter* "Uhm" *incoherent mutter*          >shifty eyes back and forth<      She finishes turning back towards the door and tosses off a half-hearted "It just did" before darkening the skies of my lobby no more.