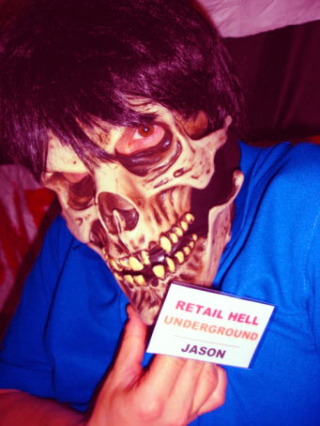 I was still an undergrad at college the last time I worked retail (ie,many years ago).  When I was working that job, eventually I met someone who offered me an undergrad research position at the university where I was a student.  As you might expect, I enthusiastically accepted that position as it was much more in line with my long-term aspirations than was working retail.

Eventually my last retail shift came along.  It was a 2-close shift, much like many that I had worked before.  My favorite manager was closing that night as well.  We had quite a bit of closing duties to do
after we chased out the last custies at 9pm that night.

However I found a moment after 9 to run into our shipping & receiving area, where amongst other things our shrink wrapping materials were kept.  Nobody was working that department after 7pm that night.  I quickly took off my work shirt (I had a regular, non-descript shirt on underneath), folded it nicely, and shrink-wrapped it.  Then I snuck the wrapped shirt to my manager's desk when nobody was watching, and went back to my closing duties (at the store where I worked it was not
unusual for employees to take off their work shirts for "street clothes" after 9 so they could more comfortably handle closing duties which often included moving pallets full of computers around).

Our manager then called us over to his desk before closing up that night.  He had a few standard words for us (including sales numbers for the day), and then he noticed the wrapped shirt on his desk.  He asked who did that, and then saw me fighting to hold back a smile.  He unwrapped the shirt, threw it back to me, and told me I could keep it.