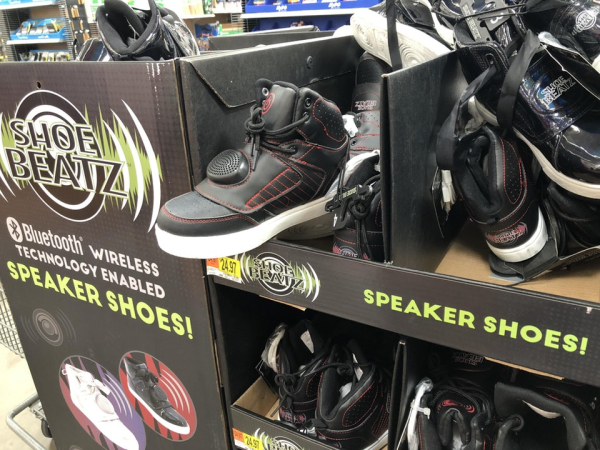 From u/Hollywizzle311: Yeah, because people playing music on their phones in public areas without headphones on isn’t bad enough...

The company behind Skittles and Starburst has teased a new treat coming out next year: Spicy versions of the two candies.

But while other spicy snacks like chips and pretzels are major hits, many social media users seem less convinced by these hot items.

Wrigley, the company behind both popular chewy fruit candies, hasn't officially announced the upcoming items, which are scheduled to hit shelves in January 2018.

Last week, however, they debuted them at the Sweets and Snacks Expo in Chicago, with a stand where attendees could try them out. 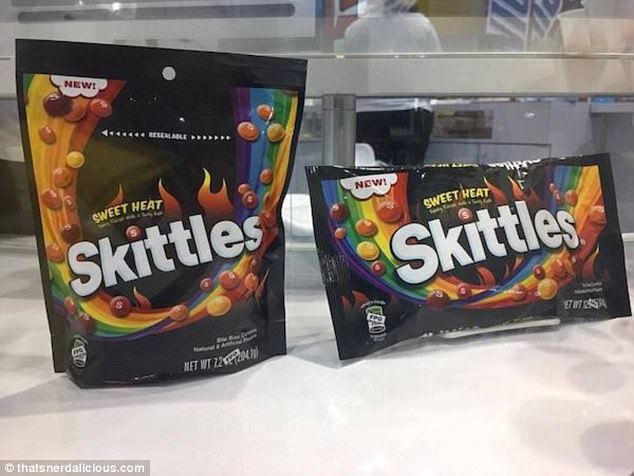 A writer at The A.V. Club who tried them said they 'taste like your standard Skittles — sweet and tart — but roughly eight seconds into chewing, a dull but noticeable chili-like burn develops on your tongue.'

Another Twitter user who claims to have tested them compared them to Mexican candy, and noted that they're 'really not that bad'.

Social media users, though, aren't convinced. While a few outliers seem very excited about the upcoming candy and have promised to buy them, the majority are expressing confusion over who, exactly, thought this was a good idea.

'WHO ASKED FOR SPICY SKITTLES?' wrote one man in all caps, while another wrote, 'Whoever approved the creation of spicy Skittles and Starburst... God will deal with you...'

Another man joked that Spicy Skittles and Starburst were an indication that the apocalypse is coming, and quite a few others simply wrote variations of the word 'ew'. 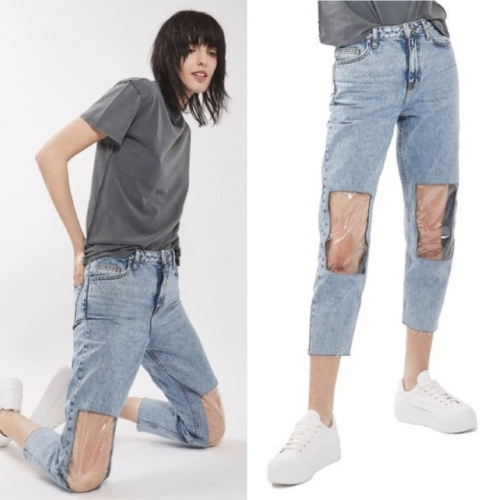 Have you ever thought to yourself, “Hey, I really wish my kneecaps would sweat more,” or, “Man, I wish people could get a better look at my kneecaps, but I’m wearing jeans?”

Well you’re in luck, because Topshop is now selling jeans with clear plastic kneecap covers sewn in. We’re not quite sure who the intended audience is for these poorly-named “Clear Panel Mom Jeans” from Topshop.

Though the internet only recently discovered this interesting piece of plastic disguised as clothing, people who have bought the Topshop jeans on Nordstrom only had rave reviews about the pants (though the comments look like they were probably left by trolls).

The jeans currently have three separate reviews ― all giving the item five stars ― with titles like “Love my kneecaps!” “I don’t have kids- they STILL fit!!” and “Great style, great comfort... great pants!”

“I’ve always loved my kneecaps. So when I saw this pair of see-through kneecapped jeans, I had to get my hands on them! YOLO,” one reviewer wrote, though it’s unclear if they’re trolling us all or not.

Another reviewer made it clear that these jeans “aren’t just for mom’s [sic],” thank goodness!

“My friends and I all bought a pair,” the reviewer wrote. “It’s been a long winter, we can still have that super fashionable skin through denim look, and stay warm! These jeans are totally on fleek!”

YOLO? On fleek? Who is paying people to write these things? Certainly not the people who reviewed the jeans on Twitter: 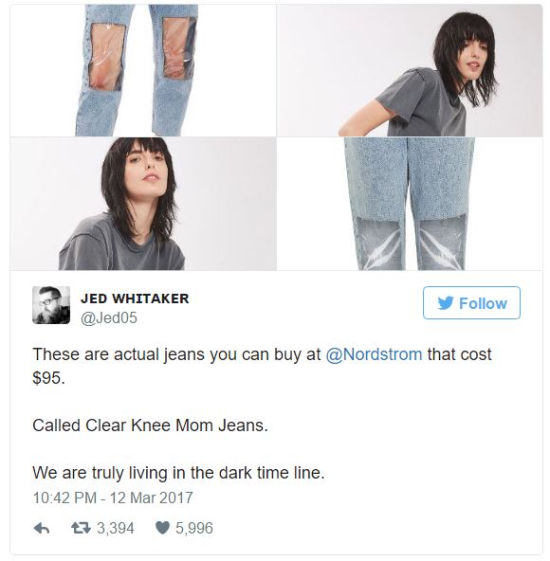 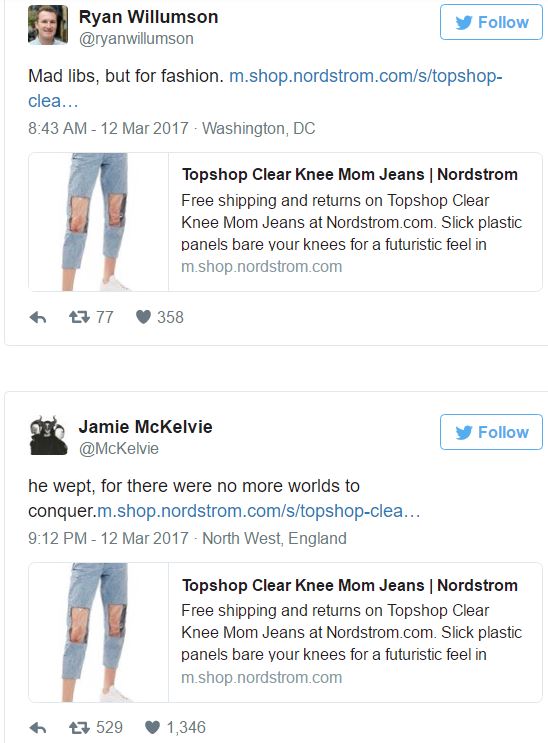 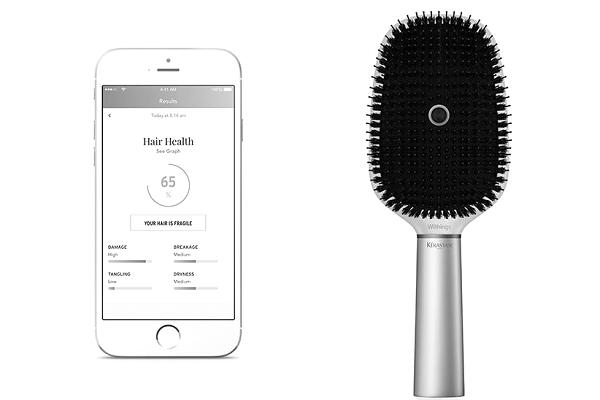 Sensors on the hairbrush count strokes, determine whether the hair is dry or wet and analyze the force used when brushing. It even includes a microphone that listens to the sound of hair brushing, to provide "insights into manageability, frizziness, dryness, split ends and breakage," L'Oreal said in a statement on its website.

The brush will send information via Wi-Fi or Bluetooth to a mobile app, and will also take into account humidity, temperature and wind, and will produce a quality score, ranking hair for damage, breakage, tangling and dryness. It will then provide hair tips and recommend L'Oreal's Kérastase products.

The French cosmetics group claims the device – known as the Kérastase Hair Coach Powered by Withings - is "the world's first-ever smart hairbrush." It was launched at the Consumer Electronics Show in Las Vegas this week and will be available in salons and online for under $200 from mid-2017. Technology company Withings makes health products including activity and sleep trackers, air quality monitors and wireless blood pressure monitors. It was bought by Nokia in May 2016 for $191 million.

"Technology is transforming consumers' daily beauty routines, and smart devices have huge potential to impact how we care for our hair and skin," said Guive Balooch, global vice president of L'Oréal's Research and Innovation Technology Incubator.

"By using connected technologies to upgrade the hairbrush — something the average consumer uses every day — Withings and Kérastase have reinvented what a person's relationship with their hair can look like and are showing how connected devices can revolutionize the beauty industry."

The connected brush is part of the "Internet of Things" trend, where products are able to communicate with each other, with companies and with consumers via their smartphones. IoT products and services attracted nearly$7.5 billion in investment between 2010 and 2015 according to analysis by CB Insights. 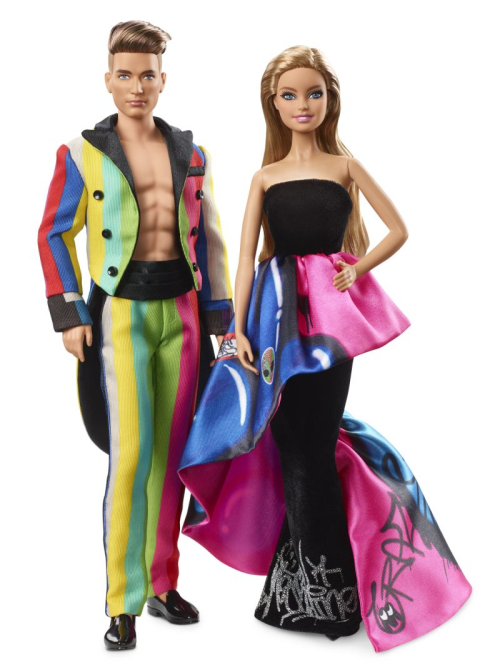 Barbie is dressed in a black velvet strapless gown showing an oversized ruffle with graffiti-inspired decorations, which wraps around the body. Ken wears a multicolor striped tuxedo.

The gift set, which retails at 239 euros, or $254 at current exchange rate, is on sale through Moschino’s online store, plus at the brand’s boutiques in Milan, Rome, London, Paris, New York and Los Angeles. There are also two beach towels printed with the image of the dolls, which are each priced at 86 euros, or $92.

Just two days after the internet had a collective conniption fit about Neiman Marcus selling pre-cooked and frozen collard greens for $66 plus $15.50 for shipping, the luxury department store has sold out of the insanely marked up side dish.

On Nov. 1, multiple outlets began to report on the item described on Neiman Marcus’ website as being “seasoned with just the right amount of spices and bacon” and “ships fully cooked and frozen.”

Yet, it wasn’t just the price point with which people took issue. Many felt that Neiman Marcus’ move was an appropriation of food culture.

“The food that was considered poor people’s food, or Southern food, or black food, is now being advertised and sold by a luxury brand,” Nicole Taylor, author of “The Up South Cookbook,” told The Washington Post yesterday. “I‘ve heard people from the South say that they were ashamed that their family cooked collard greens.”

The hashtag, #gentrifiedgreens, popped up on Twitter not long after the media coverage of the costly collard greens hit the internet, and users began to express their distaste: 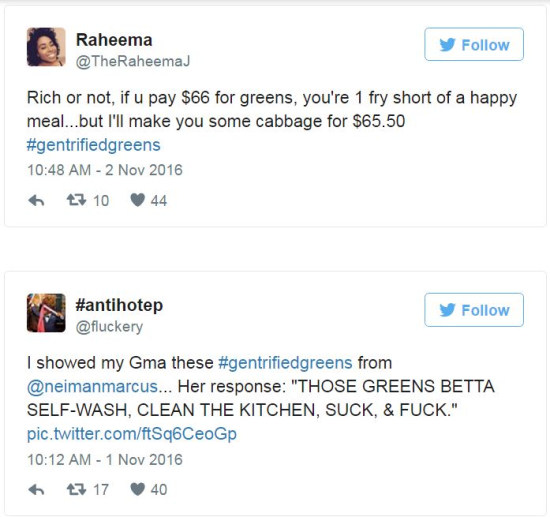