I had my first book signing in my hometown Reno and KTVN 2 News captured it! Thanks to my friend Arash Mosaleh for setting up the interview. Many family and friends came, including my old high school Journalism teacher Mary Krueger. What a surprise that was! Mary was one of my favorite teachers. I learned so much from her. I'll be posting pics on the book blog later on if any of you want to see. 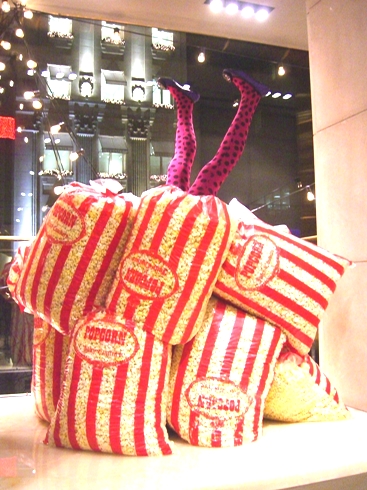 For some it's booze and chocolate....others can't get enough popcorn.

One of those nutty Juicy Couture Mannis in NYC.

I think I attract the idiots. They seem to flock to me - that, and my co-workers frequently don't feel like doing a damn thing, so I get to help EVERYONE! Oh joy, oh rapture.
Today we had extra help, since there was no GM truck to unload. They thought it would be smart to bring out all of our overstock. That's all fine and dandy, actually. We are out of stock on so much, trying to bring our shelves back from empty from Christmas.
Anyway, with about 9 people in the department, most people were getting helped pretty quickly. If they needed us, they got us.
Some bozo didn't get the message.
Now I'll admit, I was more focused on the stocking than scanning the department for idiots. I had 7 full carts waiting for me.
So one of our helpers comes over and grabs me and points to the register area (which is kind of horse-shoe shaped) and looks a little worried, so I look over and there's a guy standing BEHIND the register, where most of our locked up stuff is.
WTF??

I don't know what this guy is up to, but since he seems to just be standing there, I opt out of calling security. Bad, bad, BAD mistake. Instead, I go up to him and ask him how I could help him.
Bozo launches into a tirade about how "fucking long it took to get any help, Jesus Christ!".
The profanity and the fact that he's still BEHIND my register/counter isn't exactly helping him, but knowing that he couldn't have been there more than two minutes gets me more than a little irritated. I mask that superbly and ask him very politely to step outside of the register area. Naturally he throws a little hissy fit, but his girlfriend decides to interrupt.
"Get me one of these!" she demanded, holding up an extremely popular mp3 player that we sold out of about two weeks before Christmas.
I apologized and told her we were sold out.
"YOU HAVE TO BE JOKING!" she screeches.
Perhaps here, I should say that I am proudly Finnish, and Finns are noted for answering questions rather abruptly compared to what some people are used to. We also answer the question asked, not implied. Maybe not all Finns are like this, but that's how I've been raised, so that's what I'm used to.
I looked at her calmly and simply said, "No."
You'd have thought I just told her the world had ended. Bozo and Bozo's Bitch threw an epic fit and stomped off hurling obscenities and threats and all sorts of nonsensical crap.
My co-workers, of course, had gathered and wanted to know what the hell just happened (so did I, actually), so I told them the nutshell version.

Then the guy came back and cornered me between two carts. Oh, bad idea. Now I can bust him for being in a restricted area and intimidation! Well, he demands to know my name. I'll point out here that I'm required to wear a name badge, but because he's now annoyed me past the point of tolerance, I start throwing names out, figuring if he's too dumb to read what is plainly in front of him, I'm going to have fun with it.
Longer story short, he tells me he's going to management, yada yada yada. It really throws him off when I smile brightly at the dumbass.

I told him that would be great, that I'd love to talk to management.

The guy FINALLY gets a clue. He got wide eyed and almost ran out of the department. No idea if he actually went to management, but no one bothered me about it, so I'm guessing no.

The best part of it is that if he was at all intelligent, he would have known from being BEHIND the register/counter that we didn't have what his bitch wanted. It was right there. He was just that fucking stupid.
Here's to a better 2010,
Sisu This Custy had sense enough to refrigerate the yogurt they rejected. 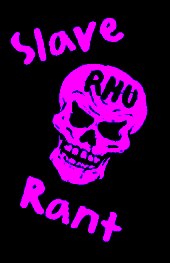 I've worked at two different retail jobs. The first was a grocery store, where I worked for 2 years before I was (ridiculously) fired for a mistake. The second, and current job, is at everybody's favorite largest retailer, where I am about to reach 2 months of slavery.

Now, I'm a pretty nice person in general. I am a bit passive-aggressive though. Make me remove from your cart AND bag AND put back in the cart your 75+ item order all by myself when you're perfectly capable of doing it yourself, and you can guarantee I'm going to take my time about it. Allude to the fact that I must be pretty stupid if I'm working here, and I'll smile and politely let you know that you're trying to slide your driver's license through my debit card machine.

But some of the worst stories I have aren't about customers, they're about the other employees.

The grocery store, as most places do, had a policy against family members working above other family members, which they ignored for my older sister and me. There's a good reason for the rule though. Family members tend to have personal agendas.

My sister, for instance, saw her in charge of me as the "natural order of things" and would therefore insist that I call her for every little thing. When I didn't, since I knew very well how to do most things for myself, she would hover over me, making constant comments about my items per minute ratio, my failure to ask for donations, or my horrid bagging skills. And when I did call her for something that required a supervisor, she would loudly berate me for "playing around on the clock" and walk away without helping me. 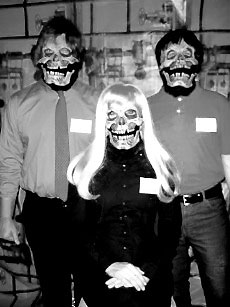 My favorite story comes from the land of supercenters and what used to be a smiley face. I had been working there for less than two weeks, and it was my first day off so far. It had been a while since I last stood all day, so my legs, feet, and ankles were all incredibly sore.

I had fallen into bed early the night before, and was still asleep and planning on staying that way for a long time. 9 am, I get a phone call.

"This is your manager. You were supposed to be here an hour ago. Where are you?"

"How soon can you be here?"

Considering I live 45 minutes away- "An hour, most likely."

I spring out of bed, throw on my unwashed work clothes, that I was planning on washing later that day, drag my dad out of bed (I can't drive) and off we go.

On the way there, I try to call about 35 times before concluding that somethings wrong with the phones.

Finally, we get there. I walk in and locate the manager I talked to on the phone.

"Here's the schedule I was given. I'm not in the system yet, so it was handwritten by ___." (the person who writes the schedules)

He snatches it out of my hand. "What day is today?"

A CSM comments "I already put her in the system as a no show for the day."

The manager: "Alright, you can go home now."

I was looking for the perfect chance to waste gas, time, and one of my absences.

I'll write again sometime with some of my stories about shoppers.

I've got some interesting ones there. 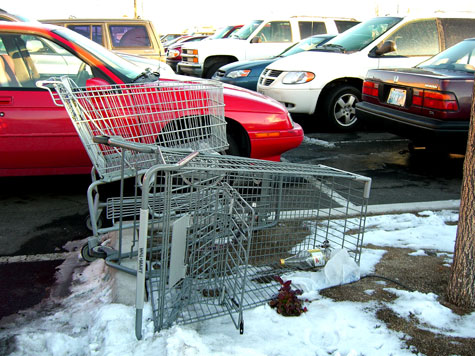 Looks like there's a few carts who will be calling in sick.