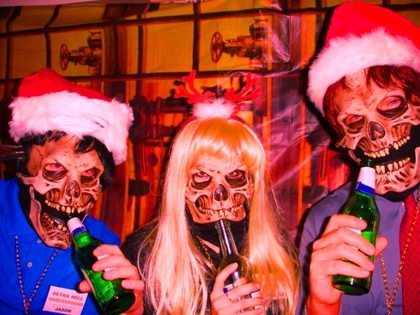 We worked our asses off during the last two weeks, Retail Slaves it's time to kick back, relax, and enjoy your life. Whether you are a Retail Slut or Retail Whore toast your good friends and family with whatever elixir makes your taste buds delirious. Oh and eat yourself into a coma. That's a must!

May your New Year's Eve be whatever wild groove you want to be - partyin' your ass off at some club, getting plastered with friends and playing games, hangin out with family and eating till your sick, or doing whatever you love to do on your own couch in your own home (we hope it's something fun and nasty).

If you have to slave away in Retail Hell tomorrow, we demand that you don't curb those New Year's Eve festivities you want to do tonight. Who cares if you are bleary-eyed from watching a marathon of Sex In The City or all three Lord of the Rings movies or you have a hangover that feels like someone beat you with a shopping bag full of rocks.

No one will give a shit. The good thing about New Years Day is there are practically no managers workers (company costs) and no Discount Rat Crazies waiting to stampede through the door to buy a five dollar computer. Yes, there will be Psycho Shoppers and Returners to drive you crazy, but hopefully you won't get any of those until after you consumed a gallon of coffee.

Have a safe, fun New Year's Eve everyone!

Don't Give Me Any Crap 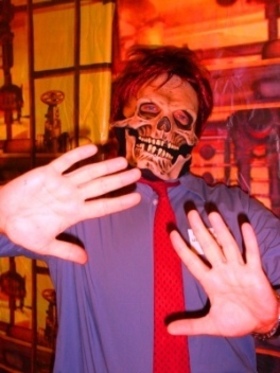 Our newest periodic feature on Retail Hell Underground will be What I Really Wanted To Say. We've all be there. Trapped behind a counter and forced to be a Retail Droid and answer the insanity with a response that most definitely is not what we are thinking inside. Today's WIRWTS comes from Freddy and has to do with the topic at hand this week: Returns.

Customer: I want to return this handbag and you better not give me any crap.

Freddy: Umm...okay, Ma'am. Do you have your receipts?

Customer: YES I HAVE MY RECEIPTS! YOU'RE GIVING ME CRAP, I SAID YOU BETTER NOT GIVE ME ANY DAMN CRAP OVER THIS OR I'M GOING TO CUSTOMER SERVICE AND COMPLAIN ABOUT YOU.

Freddy: I only wanted to know if you have your receipts so I can process the return faster.

Customer: Don't give me that. You're accusing me of stealing. I know what you're doing and I don't appreciate it. Maybe you did not hear me? I said if you give me any crap, I am going to Customer Service.

Freddy: I understand. No problem. Let me process this return for you.

What Freddy Really Wanted To Say:

How about if I rip off your head and shove so much crap down your throat it will shoot out your ass, you rude pyscho bitch. Get the fuck out of my face. Take your shit up to Customer Service, I'm going to lunch.

We doubt suicide by scangun is possible (unless you beat yourself to death with it) but we all feel like this sometimes, especially now with so many markdowns and fucking inventory on the way. This pic was sent to us by a Retail Slut at a Big Fancy Department Store, he's had it with checking prices. It's too bad the scanguns aren't more Star Trek-like and shoot lasers that evaporate annoying Discount Rats who want us to check everything for a lower sale price.

Our friend Kendra on Myspace reminded us of another Return Reaction that we use all the time and can be very useful if you have a questionable return. It's called Are You Kidding Me? or if you are really fed up and shocked by what you see, the Are You Fucking Kidding Me?

In any messy return instance you can either say, "Are you kidding me?" (we would not advice adding the fucking, but you can certainly think it) or you can use the Are You Fucking Kidding Me facial look.

Saying Are You Kidding Me? is quite powerful and lets the Returner know you are not going to take any shit if they fight you while trying to return something bogus like a used dirty handbag they worn for six months and they are claiming they got for Christmas.

The Are You Fucking Kidding Me look is sort of like Retard Face, but more direct and ballbusting - it's great for returns that did not come from your store or were purchased on sale and attempting to be returned for full price. The Are You Kidding Me Look, can be achieved by wrinkling your brow, rolling your eyes, and grimacing or frowning. It's best if you prolong your Are You Fucking Kidding Me look without saying anything and then follow it with a deep sigh. This lets the Customer know that you are on to their nasty game.

Whether you say Are You Kidding Me or you think Are You Fucking Kidding Me, it's a powerful Retail Slave tool to use. We can't always guarantee that the customer will back down, but at least they'll know you are not some stupid Retail Droid letting them get away with shit!

The phrase Are You Fucking Kidding Me is one we use a lot for everything in our Retail Hell and it will be showing up again as a regular segment here on Retail Hell Underground. Stay sane out there Retail Slaves.

Retail Fun We Are Jealous Of

Since it's snowing in so many places, we thought we'd put up this fun video from a snowboarding store. We so wish we could do this in our stores! How lucky are they!

As you all have encountered by now, today was the start of Return Retail Hell. If you are an Hourly Retail Slave, it's not such a big deal, your bitch is over Mean Crazies trying to get away with shit, but if you are a Commissioned Retail Slave where everything that gets returned comes right out of your paycheck and you also have to deal with Mean Crazies trying to get away with shit, we suggest you call in sick and stay at home under the covers for the rest of the week. It's better not to know how much money you are going to lose this month.

Every store is different with their After Christmas Return Policy. Some have made it a bit more lenient for several weeks, while others stick to normal procedures. The good news this year is that many Stores have resorted to stricter return policies (they had to do something - Return Abuse is OUT OF FUCKING CONTROL). Unfortunately several of us work at Stores where they are way too easy on returns and we have to take everything back.

Within the retail industry they have something called the Three "R's" of Returns. The "R's" are  basic choices the customers have when returning: Repair, Replacement, or Refund. While most of us have heard about those industry standard three "R's, little has been said about how to deal with Customer Crazies when executing the options, so we have created our own Three "R's" of Returns.

When a Customer questions your decision on how to handle their return, give them a Retard Face. It's very similar to a Retail Zombie Face, except you are doing this on purpose. Blank stare, dumb look, no movement of any kind. You'll want them to know that you don't understand anything they are saying or asking beyond your decision regarding their return. The only thing you comprehend is that they accept what you have told them.

If a Customer raises their voice and starts to go a little Crazy Mean, you have the option to meet them at their own level by raising your own voice and go a little crazy yourself, especially if you are 100% in the right regarding the return issue. For instance: "This greasy, dirty, USED barbecue you want to return did not come from our store, we never carried this lower end brand!" Be sarcastic, truthful, let the customer know THEY ARE NOT FUCKING RIGHT THIS TIME!!! Make sure everyone in line behind them hears your brutal honesty (Just don't use the F word like we did, you many get in trouble for that).

This is VERY important Retail Slaves. There is no way in Retail Hell you should have to stand there and listen to a Crazy Mean Customer yell at you after you've given them your Retard Face and Released The Beast. This is the time you Revoke them. That's it! You are done. Time to REVOLT the bitch. Call in the manager or someone else to deal with the return issue craziness. Managers are getting paid more to handle this. Why should you have to? Let them fight the raging-out-of-control-customer-fire. Also if a Crazy Mean Customer says the least little thing that offends you - REVOKE THEIR ASS BY CALLING 911!!

We hope Retail Hell Underground's Three "R's" of Returns will help you in the coming weeks. They are very simple. Write them down on the palm of your hand if you have to: Retard Face, Release The Beast, and Revoke! May the Return Force be with you...